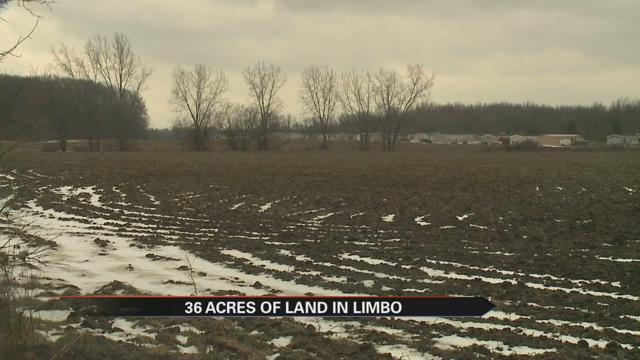 A 36 acre plot of land in a Berrien County village is still proving hard to sell thanks to a new drainage system and the village council’s vision for the property.

“Whatever is done, I’d like to see it done in a way that’s not going to destroy this small town atmosphere,” Reverend Ronald Ahrens said.

Ahrens lives next to the 36 acre spread in Three Oaks Village, MI that’s struggling to be sold.

That concern is shared by many in the small Berrien County village, and it’s one of the reasons a plan to develop the land into a subdivision three years ago wasn’t approved.

Umbrasas said the proposed development three years ago would’ve been too large; he used the word “overbuilt.”

“It just didn’t really fit the character of the community,” Umbrasas said.

But that wasn’t the only problem facing the farm land.

An expensive drainage system was installed on the property a few years ago, and when you combine the cost of its yearly assessment with annual taxes, anyone who purchases the property will have to pay a lot.

Three years later, the land is still up for grabs.

“It’ll work out in the long run,” Umbrasas said. “We’re pretty confident of that.”

Umbrasas said there are two new developers interested in the land.

He said one developer wants to build a senior living facility made up of single-family homes for those who want to downsize.

Umbrasas said the other developer wants to build a collection of homes, townhouses and apartments similar to the original plan three years ago, but one that would be less dense.

“So it’s a little more kind of in tune with what else is going on in town here,” Umbrasas said.

Ahrens agreed, saying, “I don’t want to see a bunch of condos put up there that’s super dense.”

Umbrasas said his vision for the land includes some single-family homes, townhouses and a few apartments, but he added that it’s important that any interested developers make sure they’ll be able to pay the $40,000-a-year cost for the drainage system and taxes.