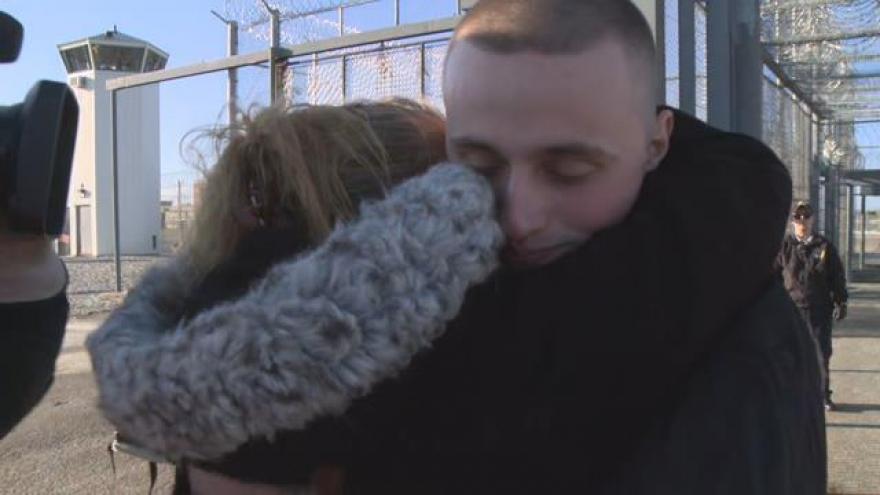 After he walked out of the gate he hugged his mother, then hugged the other family members and friends gathered in the parking lot.

Sparks' murder sentence was overturned by the Indiana Supreme Court in September 2015 and was convicted of burglary, along with his co-defendants Blake Layman and Anthony Sharp.

Sparks was sentenced to nine years in prison earlier this month. He is getting out early due to good behavior and other programs while incarcerated.

Sparks took a few minutes away from greeting his family to speak with Brandon Pope from ABC57.

Brandon Pope: How does it feel to be out?
Levi Sparks: It feels great! I'm just ready to get home and get my life together. Finally away from this place
Pope: What was it like in there
Sparks: It sucks. Sucks. It's a bad mental battle you have to face every single day, but you know I no longer have to worry about that so. I'm happy.
Pope: Did you learn anything in there?
Sparks: Absolutely! You can go out, you can have fun without doing illegal stuff, you know. You can get your life together and sometimes you just need to grow up and do the right thing so that's what I plan on doing.
Pope: Second chance?
Sparks: Second Chance.
Pope: What do you plan on doing with it?
Sparks: I plan on going out and getting a job and pursing a college education. Just see where life takes me from there but I just know it will be on a positive road I know I can do right
Pope: Seeing the family again, what kind of feelings does that bring?
Sparks: It's great. It's great. To know I never have to go back inside that place, to be able to look back to see them walk out the door and I can't. It's a sucky feeling but it's no longer like that so, it's over.
Pope: Do you have any regrets?
Sparks: Regrets as for this whole situation? Yes, absolutely. Someone lost their life, a lot of people got affected by it, our families, their loved ones, the community. It was a tragic mistake that was on our part, but I no longer have to do , it's not going to happen anymore
Pope: You've turned over a new leaf and there's a good chance…
Sparks:  I'm going to get my life together. Some people perceive me to be the same person I was out there and I can sit here and speak here all day about how I'm going to change but my actions will show it, my words to speak it
Pope: Do you feel in any part responsible for what happened to Danzele?
Sparks:  Yeah. I take responsibility for my actions and I'm sorry to his family and I'm sorry to everyone that was affected by it. And with that I would like to get back to my family and I appreciate you guys coming

Sharp and Layman were each sentenced to ten years in prison. Sharp is scheduled for release in 2018. Layman is scheduled to be released later this year.

Background
Layman, Sparks, Sharp, Jose Quiroz and Danzele Johnson entered a home they believed was unoccupied in order to burglarize the house on October 3, 2012.

Appeal filed
Layman and Sparks appealed because they believed the felony murder statute was improperly applied and their sentences were inappropriate.