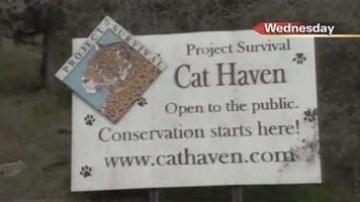 FRESMP COUNTY, Calif.  — A female intern is dead after a lion attack at a private wild animal park in central California. The sanctuary was closed to the public at the time.

State and local authorities are trying to determine what might have caused the fatal attack.

"These are very, very powerful creatures," said Jeff Corwin, host of Ocean Mysteries. "And an animal like this, like Cous Cous, could have a really good disposition, maybe a great animal, as an advocate for a species, as an endangered creature from Africa. But the truth is, it is powerful."

A Fresmp County Sheriff's deputy shot and killed the lion after he was unsuccessful in luring the lion away from the intern.

Officials from the sanctuary said they raised the lion from a cub and they have never seen it display aggressive behavior.