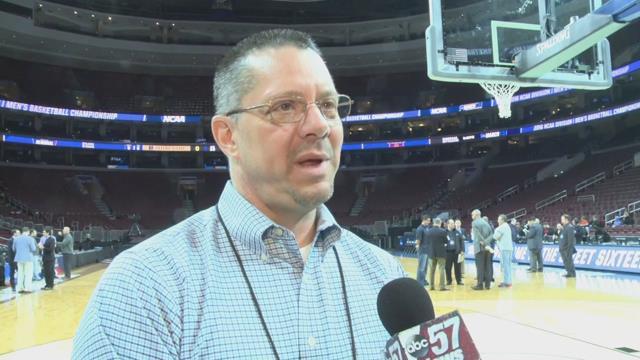 Notre Dame and Wisconsin's men's basketball teams go head to head in the Sweet 16 Friday night. They're both hoping for a win and a trip to the Elite Eight.

"I think it helped Notre Dame down the stretch down 5 to Stephen F. Austin when the game was lost with a minute and a half to go. Certainly Wisconsin is not going to be intimidated by any situation late in the game, so it benefits both and makes for quality entertainment Friday night," said Prister.

"They had that cloud of ACC champions over their head. Then we lose two in Orlando and you're not any good. Last year's team just had to play. This group had that aura the whole time - that's why I have a lot of respect for them," Coach Brey said.

Wisconsin's style of play is slow and methodical, where every possession matters.

For the current group of Irish players, no matter who they play, they believe when they play their style, they're tough to beat.

"We bring our own swagger, we bring our own engine, we bring our own style. We have a great rhythm offensively, we're playing really well defensively. We're doing the little things that don't show up on the stat sheet, but doing all those things give us confidence going in to the next game," said forward Bonzie Colson.

Prister says Wisconsin's defense may provide Notre Dame with openings from beyond the arc.

"That make it a little more difficult for Demetrius Jackson and those that want to penetrate - it may open up some things in the three point game for them though," said Prister.

One of the players looking to cash in is junior forward V.J. Beachem. He has been shooting 50 percent from 3-point range in his last seven games - including the NCAA tournament.

"They really try to pack it in some. So we may get our usual open shots. Just got to be ready to knock them down. But I'm really now sure what they'll throw at us," said Beachem.