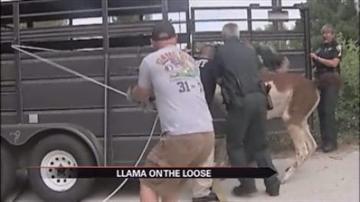 TALLAHASSEE, Fla. -- One Florida police department is used to dealing with calls about people running wild in the streets but not llamas.

Deputies in Tallahassee spent hours trying to corral a llama.

Their actions only angered the animal which ultimately backed up traffic forcing the deputies to use a teaser on the six foot tall animal.

"I've been doing this 20 years and they said there is going to be a lot of excitement in this job, but no one ever told me I would get spit in the face by a llama and trampled by one," said Tony Drzewiecki.

The llama has since been reunited with its owner.