Local chaplain steps out against the country's trend 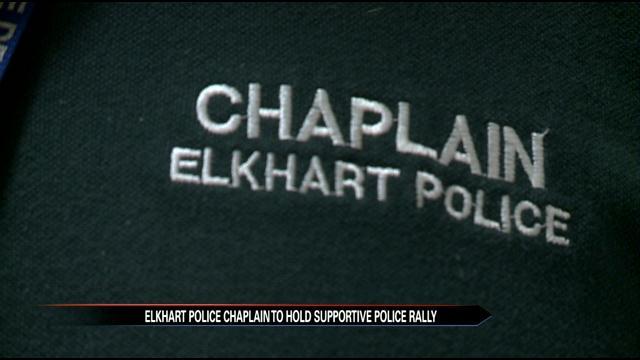 A local man of faith is taking a stance against the negative spotlight shined on law enforcement in recent weeks.

After what has happened in Ferguson, Cleveland, and New York City, people have taken to the streets showing their displeasure with police officers.

One Elkhart Police Chaplain wants something different to happen on Saturday morning.

He wants folks in Michiana to take to the streets of Goshen to show officers support.

Chaplain Jim Bontrager said it is time to come together and show appreciation for those who keep us safe, especially after the recent killings of two Brooklyn, New York police officers.

Everyone has seen the shirts and the protests all over the country, and even right here in Michiana.

He has been working in the same building for twenty-one years now.

“Things have gotten to the point where many officers I know are greatly discouraged,” said Bontrager.

He said the country-wide tension between police and the people is even felt here in Michiana.

“The concerns people have around the country, people have the tendency to lump all law enforcement together,” said Bontrager.

So Saturday morning, the man of faith is asking for the community's help in showing appreciation while bridging the gap between law enforcement and residents.

“We have this overwhelming majority of police officers that serve us honorably and I think it behooves us to show appreciation,” said Bontrager.

It is a rally in favor of law enforcement, “Well the rally is basically no controversy, no drama…” said Bontrager.

He has one mission in mind.

“We appreciate the sacrifices you and your family make and I want to honor you today and let you know to keep doing an excellent job, we need you,” said Jim Bontrager.

That walk is set for 9:00 Saturday morning at the Goshen Courthouse.

Any and everyone are encouraged to attend.
Share this article: