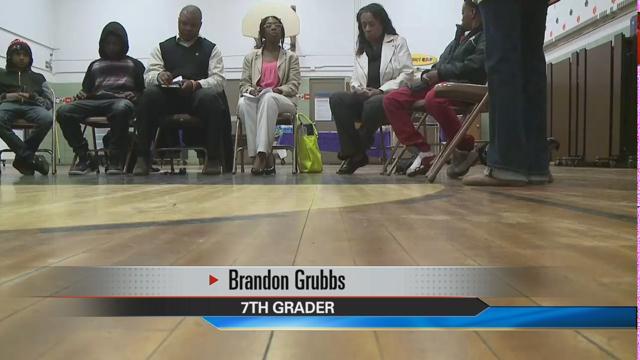 In the midst of riots in Baltimore, one group in Benton Harbor held a peaceful conversation regarding President Obama's initiative called 'My Brother's Keeper.'

The goal of the President's plan is to stop the generational cycle of poverty one young man at a time.

The task force in Benton Harbor said they want to mentor young men from 'the cradle to their careers' to ensure success in their lives.

Two 7th graders who participated in the conversation believe the first step is getting kids to stay in school.

Sean Campbell said, “Some kids don't even know how to spell 'house' and stuff.”

Grubbs said, “I'm just happy education is in my life so I can actually do something and be someone when I grow up.”

Grubbs said many kids his age drop out of school.

Grubbs said, "Education means a lot to me because we can learn to survive and they teach us a lot and I'm actually happy I'm still in school and not a drop out like some other people because some people don't even care about their education.”

"My Brother's Keeper" has a focus on building ladders for minority males so they can find jobs.

Rod Jennings said, “Instilling life skills into young men who in a lot of cases don't get them early on from home.”

Jennings is a Benton Harbor High School football and basketball coach. He said 89-percent of homes in Benton Harbor are without a father figure.

Jennings said, “We want to see things improve by at least 25-percent concerning the dropping of the teenage pregnancies, more people being able to read and compute.”