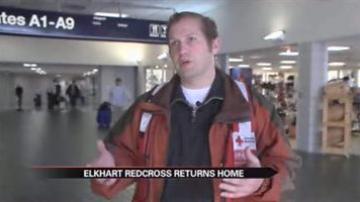 "It's good for the folks we help, but you know what? It's even better for us."

Housing thousands is no easy task, but it's nothing new for Frank Connolly.

"This is the American idea of community," said Connolly. "When our neighbors are in need, we help out."

Connolly is Director of the Elkhart American Red Cross.

He returned home to Michiana after spending two weeks in New York helping out with Hurricane Sandy relief efforts.

He was in charge of sheltering operations for the entire state.

Lack of time to prepare combined with a shortage of gas made things difficult.

He had to overcome these obstacles to make sure people hit hardest got the help they needed.

"It was an incredibly stressful environment, because you recognize how many people rely on the work you did," said Connolly.

Despite its massive size, New York City has very few places for shelter.

"Here in our community, we've got schools, we've got churches and lots of places we can use," said Connolly. "In New York City, there aren't as many churches, and schools are pretty well taken up."

He said his ability to help volunteers work through issues like this better prepares them for potential local disasters.

"They go out, and they serve the New York community. But they prepare to serve our community, if we have a disaster," said Connolly. "To me, that's a wonderful American ethos."