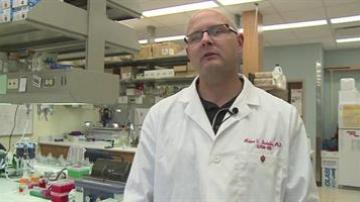 SOUTH BEND, Ind. -- A scientist in South Bend has been studying the Ebola virus for many years. He says the recent outbreak has him working harder than ever to understand the virus.

"Trust me it's been very difficult. I hardly sleep these days," said Princess Eva Cooper.

The Ebola virus is devastating parts of west Africa.

"It's sad to know that you have your family and friends back home and their lives are in danger," said Cooper.

Cooper is in the US temporarily, but Liberia is her home.

"The disease is very deadly, people are dying day by day," said Cooper.

Robert Stahelin has been studying the Ebola virus for eight years. He says it’s a very smart virus.

"It's able to replicate and really invade the immune system early on in the infection," said Stahelin.

"It can cause damage to things like the liver and kidney which eventually lead to organ failure," said Stahelin.

That can happen in a matter of days.

"Unlike something like HIV which can take longer to make a person sick, the virus can take anywhere from 2 to 21 days," said Stahelin.

Cooper says Liberia is not equipped to fight off this epidemic alone – her country needs help.

"We don’t have that many medical doctors and the little we have, we are already losing them to the virus so it's very sad," said Cooper.

Stahelin says when it comes to a cure-- there aren’t any FDA approved drugs yet, but there are some things in the works.

"A lot of those things show promise so they could indeed be useful in treating the infection," said Stahelin.

While experts say there’s no real threat of the virus spreading in the U.S., people in Liberia are just hoping the epidemic can be stopped before it's too late.