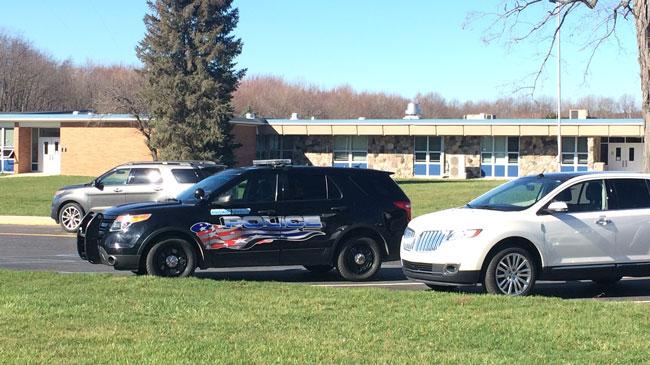 According to River Valley School District Superintendent Will Kearney, a threat about a shooting at the school and a bomb being planted in a locker was written on a stall in the girl's bathroom.

“It basically stated that I’m going to come to school and shoot up the school tomorrow and they placed a bomb in one of the lockers, however, there was no evidence of a bomb whatsoever," said Chief Todd Taylor of the Chikaming Township Police Department.

Police were called in immediately and a K-9 was used to search the school.

During the lockdown, students stayed in their first period class and the teachers continued teaching.

Nothing was found during the search and the lockdown was lifted before 11 a.m.

The school used cameras to identify the students who had walked into the bathroom around the time the threat was likely written.

They eventually found the student who allegedly wrote the threat and that student was removed from the school.

Parents were sent an alert after the lockdown began and when it was lifted.

The superintendent says this is the first threat they have faced and was pleased with the response of police, teachers and students.

They will also evaluate their own response to the incident, including how quickly parents were notified.

River Valley contacted nearby districts, including Buchanan, New Buffalo, and Bridgman. All were placed on perimeter lockdown as a precaution.

Administrators say the student will be suspended until March 28, which is the next school board meeting. The board will determine whether the student should be expelled.