Locked out for 10 months, Honeywell workers rally ahead of new negotiations 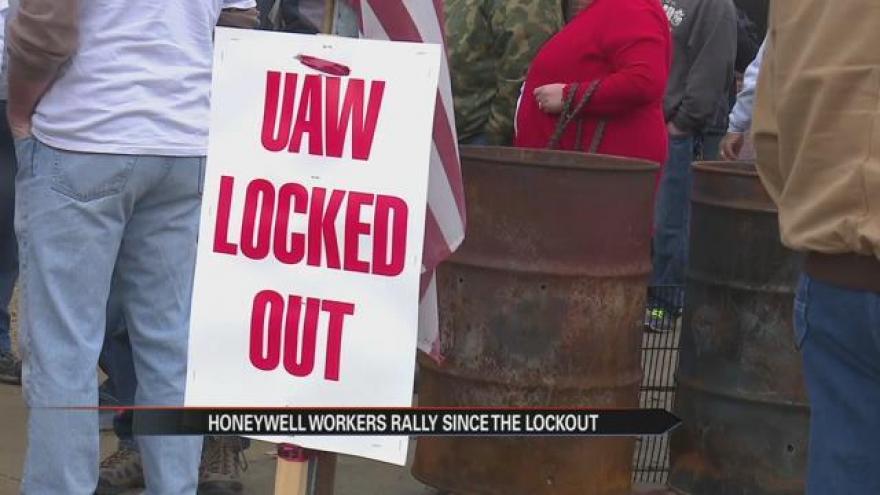 It has now been 10 months since Honeywell employees were locked out of the plant, due to contract disputes. Saturday, people from all over the country, continued to speak up and stand tall in solidarity with the union workers.

80 years after the success of a sit down strike, that gave automobile workers a union of their own, some believe things still haven't changed.

"We're here to celebrate that today, and make people realize that the struggles the folks had back in the 30's are really not different than the struggles people have today," says Bryan Rodgers, a member of UAW Local 9 in South Bend.

At the UAW Local 5 Post  in South Bend Saturday afternoon, hundreds flocked to show their support for the Honeywell workers who have been locked out since May 2016.

"I'm here because, I drove here from Detroit this morning, because I wanted to supported these workers," says Frank Hammer. "I want them to be able to get back to the table with Honeywell and negotiate."

Hammer is a retired UAW member, one of the many supporters who live out-of-state, who felt it was important to stand behind those fighting for their work.

"I think that it's incumbent upon us to support workers wherever they are, because an injury to one, is an injury to all," adds Hammer.

An injury that has taken a toll on Michiana families.

"10 months is a long time. 10 months without a good paycheck and a good working job, kinda makes you feel a little worthless," says Tom Treder.

Treder is the Vice President of UAW Local 9. In the days ahead of new negotiations with Honeywell. He says the commemorative rally is a perfect time to remember their roots, and remind the community of all that is still important today.

"We want the community to understand this is a lockout. We didn't walk out on our own. They escorted us out of the building," he adds. "This is not a strike. And I think that's the one of the hardest things to get across: that we didn't walk out the door."

The rally reinforced supporters' belief that to stand tall, is to stand together.

"It's tiring at times, but I talked with some of the members, and they're the inspiration to continue this fight," says Rodgers.

"Solidarity is something you can only know by engaging in it," adds Hammer. "And that's what we have today."

The UAW Local 9 and Honeywell will resume negotiations on February 21, 2017.