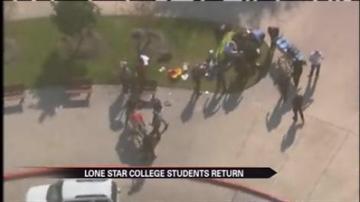 HOUSTON. -- It was an emotional start to the day for students at Lone Star College in Houston.

Tuesday's shooting sent four people to the hospital. Deputies say it all started with an argument between the accused shooter and another man.

Some students say they were ready to get back to class and feel safe on campus but others were concerned.

"I'm not going to class probably for another couple of days, I've never experienced anything like this," said Bettye Mitchell, Student. "It's still in my head, it still plays, over and over, almost like a broken
record."

The accused shooter has been charged with aggravated assault. He remains in the hospital right now.