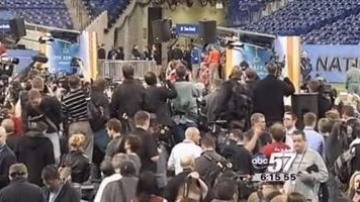 INDIANAPOLIS – Tuesday was Super Bowl Media Day at Lucas Oil Stadium, and for the first time ever -- football fans were granted all access!

The NFL handed out more than 7,000 tickets Tuesday morning.

Everyone who scored a ticket also got a radio, so they could hear their favorite players answer questions from the media.

Fans say it's exciting to be a part of history!

"This is so cool to be this close to all of the action. Since you can't get super bowl tickets, because they are so expensive, this is definitely the next best thing!” said Katie Lipke.

“Every player that's out here we can pick and listen to. Tom Brady was just talking to Dion Sanders just a few seconds ago,” said Chris Brewer.

Media Day is always full of interesting characters. The Patriots’ Wide Receiver Wes Welker donned a cowboy hat. One reporter even dressed up as superman!