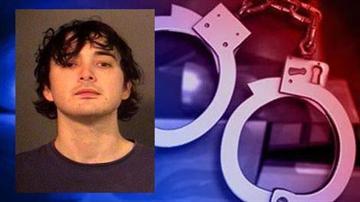 ST. JOSEPH COUNTY, Ind. -- A man has been arrested for allegedly hitting a 4-year-old boy and threatening to kill the officer, the officer's family and President Obama.

According to court records, St. Joseph County Police were called to a disturbance at the Martin's Super Market on Adams Road in Granger on April 15.

When police arrived, store officials said 25-year-old Eric Parks had been yelling and creating a scene inside the store. He also allegedly struck a child while in the store.

Police spoke with the father of the 4-year-old victim, the victim and his brother. They said Parks was yelling in the store while standing next to the three of them in the checkout lane.

The older brother said Parks pushed him out of the way and Parks punched the 4-year-old in the face.

Police noticed the 4-year-old had a knot above his eye, a knot on the back of his head and a bloody nose.

Officers then spoke with Parks, who was being detained. He said he was a sex slave for the federal government and "people would pay for what they had done to him."

Parks allegedly admitted he was planning to hit a girl but decided to hit the boy instead.

While transporting Parks to jail, he threatened to kill the officer and his children, said he thought government agents were after him because he was going to kill President Obama.

Parks told the officer to check his Facebook posts for the "truth." When the officer checked Parks' Facebook page, there were posts about injuring children, killing the president and threats to kill Secret Service agents he thought were after him.

Parks is being held on $1 million bond.

Parks' grandmother is recovering from surgery and didn't want to go on camera, but spoke about her grandson. She said Parks is on medication for psychological issues and that he often mixes it with synthetic marijuana.

She said Parks has suffered from mental illness his whole life. She said his issues are related to the murder of his mother 21 years ago.

His mother, Sandra Hernandez, was found murdered in Elkhart in 1993. Parks was 3 and a half when she was killed.

His grandmother says she can't believe Parks would strike a stranger - or a child.

He's due back in court on May 2nd.