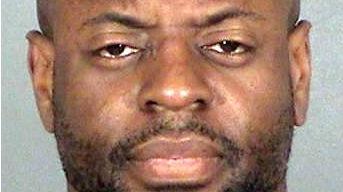 A man was arrested Thursday after police say he caused bodily injury to his girlfriend and walked into traffic after refusing arrest.

Indiana State Troopers from the Fort Wayne Post received the call around 9:00 a.m.

Police say a man was beating a woman in the median of the Indiana Toll Road near the 136 mile marker.

Police arrived and saw the suspect driving a silver Dodge Charger.  He then left the scene and headed east to exit the toll road to I-69 south.

Police were able to stop the driver on I-69 near the 354 mile marker.

After police stopped the vehicle, they noticed both the driver and female passenger had signs of injury. There was also a young child was restrained in the back seat.

39-year-old Tirrell Rogers of Clarkton, North Carolina was driving the vehicle at the time of the traffic stop.

An officer asked Rogers to step out of the car to question him about the alleged incident while another officer spoke to the female passenger.

Police say Rogers complied and explained that he had gotten into an argument with his girlfriend over her cell phone but wouldn’t answer questions about his injured arm.

After talking with Rogers and discovering a bite mark on his girlfriend’s arm, police attempted to arrest him but he refused.

Police say Rogers was asked to place his hands behind his back and he immediately said, ‘No’, walking away into traffic on I-69.

Rogers continued to walk down the interstate and at one point said ‘shoot me’ to police while holding his hands above his head.

After officers attempted several more times to gain his compliance, Rogers refused and police shot him with a taser, however the first two attempts were unsuccessful due to probe disconnects in those tasers, according to police.

Once Rogers was subdued with the third taser, he was handcuffed and refused medical treatment at the scene.

He was taken to the Steuben County Jail where he faces multiple charges including strangulation, domestic battery in the presence of a child, intimidation, criminal mischief, obstructing traffic, and resisting law enforcement.