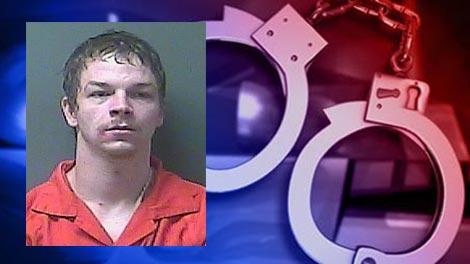 LaPorte Police were called to the Taco Bell on Pine Lake Avenue Sunday just before 10 p.m. in response to a man sleeping or passed out on the floor of the restaurant.

When officers arrived, they found Darren Lovins, 24, face down, asleep on the floor.

Officers woke up Lovins. He appeared intoxicated, had difficulty keeping his balance and had slurred speech, reports said.

Employees told police Lovins had entered the business and allowed him to use the phone. While waiting to order food, he got on the floor and fell asleep, according to police.

Lovins was taken into custody.

When searched, officers say they found 3 packets of a white substance that tested positive for heroin.

Lovins was charged with possession of a controlled substance and public intoxication.