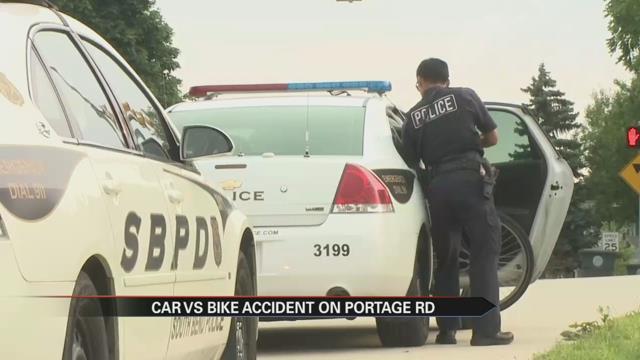 A bike and car accident in South Bend took an unexpected turn when a woman involved in the accident was arrested for an unrelated outstanding warrant.

It happened at the intersection of Portage and Angela Boulevard around 7 p.m. on Wednesday.

Police said the male was taken to the hospital complaining of leg pain but is expected to be okay.

Kevin Howard said, “Boy was laid out in the road. He was definitely hurt. I’m not really sure the extent of his injuries."

Howard said he came home from work and saw several police cars near his home.

Howard said, “You don’t expect that to happen right at the end of your street.”

Police on scene said it appears that the man on a bicycle ran into the side of a moving car at the intersection.

Howard said, “I think there’s a lot of people who go a little faster than they should around here.”

Howard said the 5-way intersection is a tricky one for motorists.

Howard said, “It’s summertime, people like to get out  and walk and bike and everything else. I really think that people don’t watch for pedestrians and people on bikes.”

Police put the bike in a cop car and a woman somehow involved in the accident was arrested at the scene for a warrant that was not related to the accident.

Police said the warrant was for a misdemeanor.