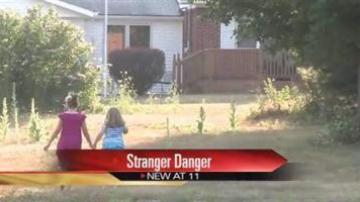 WARSAW, Ind. --  Scary moments unfolded Monday in Warsaw, when a man pulled up and tried to get a child inside his car, using candy as bait.

The 12-year-old girl, Emily Oler, said she used her self-defense skills to fight that man off and get away safely.

Emily said she was just playing in her front yard, when all of a sudden a car pulled over in her driveway.

That's when Emily grabbed her little sister and then ran inside to tell her mom.

"At first, I thought she had fallen or hurt herself because she was holding her arm and shaking," said the victim’s mom Angie Oler.

Angie Oler and her husband quickly called the Kosciusko Sheriff's Department to make a report.

"He said, 'Show me exactly what happened, and where it happened.' and he had her walk through the whole thing with him," said Angie Oler.

Emily was even able to give a description of the man.

"He was bald and he had a black cap with no bill and a red t-shirt," said Emily.

Angie said her husband is a firefighter and has taught their daughters to stay away from strangers.

"She made sure she got away from him," said Angie Oler.

Now Angie wants to tell parents to make sure they get the right training too.

"Definitely speak to them about the whole stranger danger thing,” said Angie Oler.

Emily described the man who tried to snatch her as a bald man in his fifties with a cap, a red t-shirt, and black sandals.  She also said he was driving a small white car.  Anyone with any information should contact the Kosciusko Sheriff's Department.