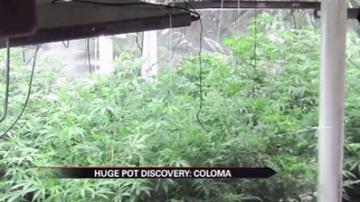 BERRIEN COUNTY, Mich. -- A Berrien County couple is accused of running a marijuana grow operation right across from city hall.

The Berrien County Sheriff's Office and the FBI have been investigating the situation for months.

Dennis Dickson, 66, and Emily Jacobs, 57, were arrested on marijuana drug charges stemming from a drug grow operation at 127 E. Center Street in Coloma.

City Hall, the library and animal services are all within a few blocks of the building.

"I smelled weed constantly and I was like- man where is it coming from?” said Pat Bailey.

Bailey lives in Coloma and noticed the smell for weeks but never imagined a large grow operation was operating out of a warehouse he rides his bicycle by daily on his way to work.

"Right by city hall. Right across the street from city hall,” said Bailey.

Police knew something was going on and after months of investigating they moved in on Tuesday morning.

Boyce says they discovered a grow operation complete with timed lights and a watering system!

"A lot of time and money were put in to setting up this operation,” said Boyce.

Narcotic investigators also executed a search warrant at a home where a couple was arrested.

Police say they also found a small amount of processed marijuana inside.

Most residents ABC 57 News spoke to were shocked that the drug operation was right smack in the middle of the downtown area.

"You know you would expect it in some country road-but not in the middle of the city,” said Ray Mayes of Friendly Tavern.