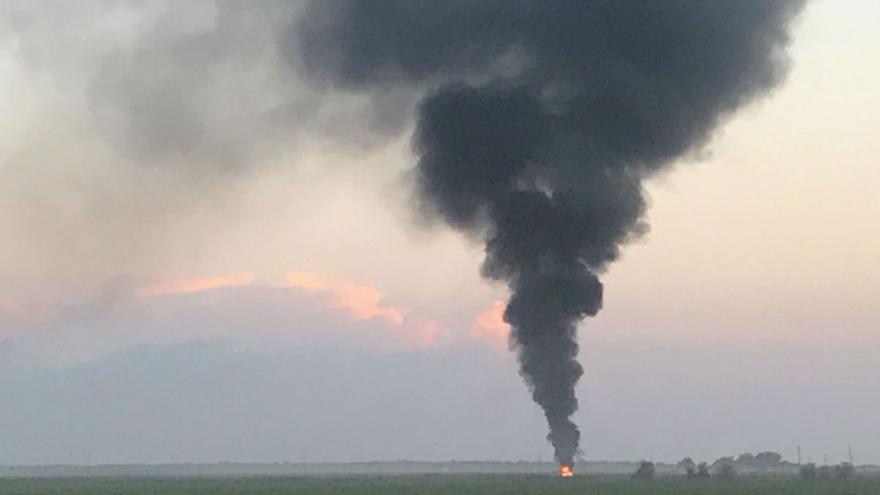 (CNN) -- Fifteen Marines and a Navy corpsman who were killed when their transport plane crashed in the Mississippi Delta were on a training flight moving personnel and equipment from North Carolina to California, a Marine Corps spokesman said Tuesday.

The plane, which the military can use to refuel planes in the air and carry cargo, went down in a rural area just off US 82, about 85 miles north of Jackson, with debris found on both sides of the highway, CNN affiliate WDBD reported.

"Every resource we can pull from will be used to determine what happened," Aranda told reporters a couple miles from the crash site.

All 16 service members who were aboard the plane died, officials said. Their names weren't immediately released.

Officials also didn't indicate where each was based. But Aranda did say:

-- The aircraft belonged to a Marine Forces Reserve refueling and transport squadron based at Stewart Air National Guard Base in Newburgh, New York.

-- The flight was taking personnel and equipment to California's Naval Air Facility El Centro, about 100 miles east of San Diego.

Because the plane was carrying small-arms ammunition and personal weapons, an explosive ordnance disposal team was at the crash site, military officials said.

"Out of precaution, we just wanted to make sure people do not approach ... just out of general safety," Aranda said.

Flames and dark smoke rose from part of the wreckage in a field off the highway, video from WDBD on Monday showed.

CNN affiliates WDBD and WHBQ, citing officials they didn't name, reported the plane had stopped in Memphis, Tennessee. Aranda did not confirm that, saying he didn't know details about the aircraft's flight plan.

A witness to Monday's crash, Andy Jones, said he heard a loud bang while working in a field near his catfish farm.

The plane spiraled, nose down, to the ground, Jones said. One of the engines appeared to be trailing white smoke, he said.

He called 911 after the crash. Jones said he didn't see the impact because trees blocked his view.

"Melania and I send our deepest condolences to all!" the President tweeted.

The Marines' commandant expressed his "deepest condolences to the families of those killed in the aircraft mishap yesterday afternoon in Mississippi."

"Please keep the families of our 16 fallen service members in your thoughts and prayers," Gen. Robert Neller said.

Interior Secretary Ryan Zinke, who had long service as a Navy SEAL, was among officials posting condolences on social media. "Please join me in praying for or sending good thoughts to the families and unit of the Marines we lost tonight in the C 130 crash," Zinke wrote on Twitter.

U.S. Sen. Thad Cochran, R-Mississippi, posted on Twitter: "Deeply saddened by the loss of life in today's @USMC KC-130 crash in the Mississippi Delta. Our thoughts & prayers are w/everyone involved."

Often used for airborne refueling, the KC-130, made by Lockheed Martin Corp., also can be used to deliver cargo, troops and equipment.

One of the most recent crashes of a US C-130 cargo plane happened in October 2015, when one went down 28 seconds after takeoff from Afghanistan's Jalalabad Airport near the Pakistani border as it was heading to Bagram Airfield. The crash killed 14 people.

A US Air Force investigation blamed the crash of the C-130J on the misuse of a night-vision goggles case that the pilot had placed in front of the cockpit yoke while the plane was on the ground.

The pilot put the case there to prop up part of the plane's tail to help the loading team deal with some tall cargo, but the case was never removed, and when the plane's nose pitched up too far, the case blocked the yoke when the pilot tried to move it forward, the investigation report said.

Correction: An earlier version of this story incorrectly reported the FBI is at the scene of the crash. The FBI told CNN on Tuesday that it is not at the scene.