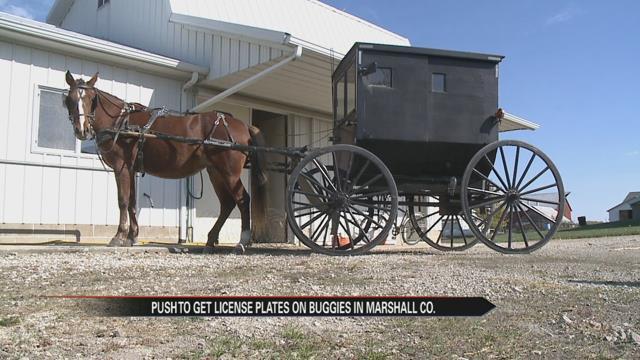 Should a horse and buggy have a license plate?

Marshall County officials think so and they’re in the process of passing an ordinance that will make it happen.

But the ordinance is not strictly for identification purposes, it’s to help the county raise funding to repair its roads, according to one county commissioner.

According to Griewank, a big contributor to county road damage is local horses and buggies used by the Amish population.

The licensing ordinance Griewank has proposed would mean every horse and buggy owner in Marshall County would have to pay $50 for a license each year. The revenue would go into repairing the county’s roadways.

“We just don’t get the kind of funds back [from the state] to repair our roads,” Griewank said.

An Amish resident of Bremen in Marshall County, who has operated a horse and buggy his entire life, thinks the proposed ordinance is a good idea.

“We need the roads,” Albert Yoder said. “Our roads are bad shape out here.”

Yoder said he feels his community would support the idea of paying for buggy licenses if it meant having the roads they rely on repaired.

Griewank said she hopes the horse and buggy community supports the ordinance because it will help Marshall County in a big way.

“Maybe we can get our roads looking better and nicer and so forth [with their help],” Griewank said.

The licensing ordinance has already passed its first reading in the county commissioners’ last meeting.

Griewank said the next step is holding a public hearing, hopefully on the first Monday in November, then holding a second and possibly third reading to officially pass it.

If it does get passed, the ordinance will go into effect this coming January, and horse and buggy owners who do not purchase a license will be fined $50.