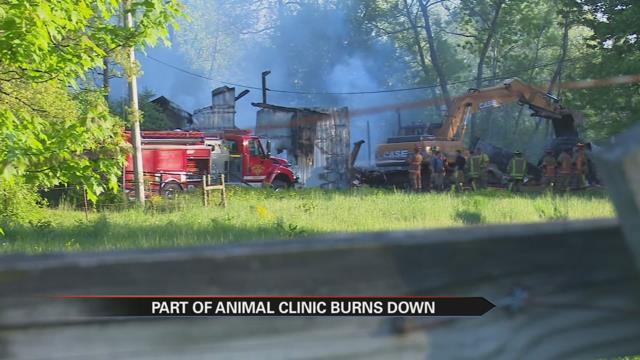 Syracuse residents are in shock after a huge blaze destroys a beloved local business.

And after the flames were out, many were saddened by what they call a total loss for the community.

“There’s not anything he wouldn’t do for anybody,” said resident Lyn Fisher.

A beloved pet clinic that’s been a staple in this county for years will have to start over following a massive fire.

“It’s heartbreaking its heart wrenching for the doctor and his staff,” said Fisher.

Multiple departments including Benton Township, North Webster, Turkey Creek, and Milford Fire had to cover the scene as the fire was still burning over an hour later, according to dispatch.

The aftermath of what’s being called a tragedy has many hoping for the best but preparing for the worst.

“I was worried about the animals, when I looked back, well they weren’t going to save it, and there was no way they could save it,” said Fisher.

The owner tells ABC 57 several chickens were killed in the fire and his cats are missing.

In addition to housing animals, the facility was also home to a family.

He says the American Red Cross will help that family.

But even at this low point, many believe the owner will make it through.

“Hes a strong man, and he’s a Christian man, so he’ll be fine and the community, we’ll stick by him,” said Fisher.