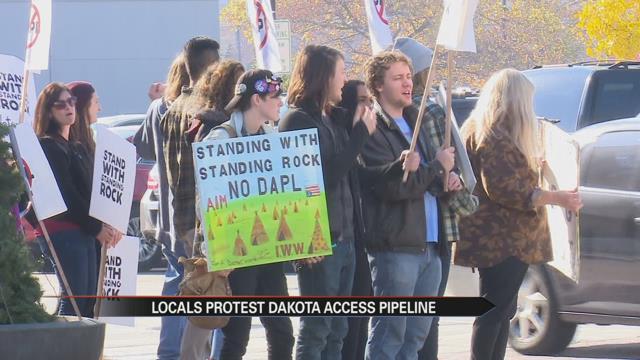 Their reasons for protesting were as diverse as their signs, but each demonstrator said they stand with Standing Rock.

McCall says her concern is water.

“We’re trying to protect all of our natural resources here, so it is important to me. It’s personal,” McCall said.

McCall says she’s worried that when the pipeline is built, the crude oil it will carry could damage water in the four states it will snake through.

For others it’s about supporting the Sioux tribe.

The pipeline is set to be built right next to their Standing Rock Reservation in North Dakota.

“We definitely feel like family. When natives get together it’s like a family reunion of cross tribes,” Andrea Topash-Rios said.

Topash-Rios is Pokagon, and she came from Niles to protest.

“Standing Rock is promoting a unity and connection between tribes that in fact maybe never existed,” Topash-Rios said.

That unity includes the local Pokagon band of Potawatomi Indians.

The band has written letters to President Obama, the Attorney General, and other leaders in support of Standing Rock.

Tuesday was a national day of protest for opponents of the pipeline.