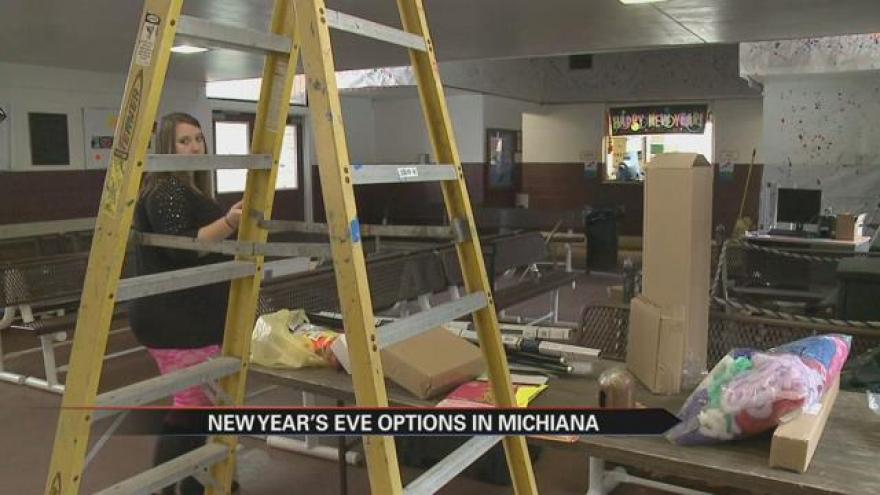 From grand elegance to 80’s pop New Year’s Eve celebrations across Michiana have all tastes and ages covered to ring in 2016.

“We are hoping to attract under the age of 18 sent out most flyers to the elementary school,” says Shauna Delregno, a Manager at Merrifield Park in Mishawaka.

“We attract ya know mid 20’s to and an older crowd as well,” says Richelle Gingerich, a Director at the Palais Royale in South Bend.

One was out directing a Zamboni and the other plating panna cotta.

“We’ll have confetti going off at midnight and the champagne toast as well,” says Gingerich.

Gingerich says New Year’s Eve at the Palais Royale will include a band, dancing, and an elegant meal. This is a tradition going on its 13th year.

“It’s something they put on their calendar to come back and do every year. It’s a great hot spot to have a New Year’s celebration,” says Gingerich.

At Merrifield Ice Rink in Mishawaka, Delregno is hosting the first 80’s themed ice skating night targeted to kids in the area.

“I remember as a kid I only had bowling as an option on New Year’s Eve and I wanted to provide a safe place for the children to come out and hang out with their friend past midnight because it’s kind of rare thing,” says Delregno.

Whether it’s a first time party with  neon decorations, or an annual gala with a crystal chandelier, the objectives are pretty similar.

“I love doing stuff like this. So it’s just fun to see how it all comes together and just hopefully the public likes it,” says Delregno.

“That’s our goal for every event to see it come together at the end and see everyone happy and having fun,” says Gingerich.

The event at the Palais Royale sold out. The 80’s party at Merrifield ice rink starts at 8 p.m. and lasts until 12:30 a.m. Tickets are $10 and include admission, skate rentals, food, and party favors.