Michiana potters come together to share art and techniques 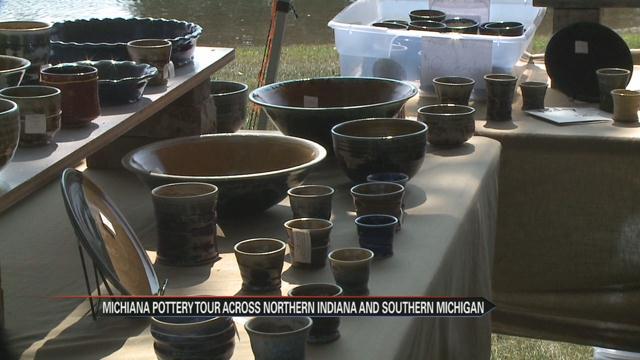 The  Michiana Pottery Tour is back again with six stops across Northern Indiana and Southern Michigan. It’s the fifth year this tour is in session and nothing but handmade pottery from the Michiana region is sold.

Moey Hart, the owner of Northern Indiana Pottery Supply, said this tour happened out of the blue,  because a couple of passionate potters wanted to see their work displayed.

“There’s a group of potters here in Goshen, a brotherhood that’s pretty close, and they got a board together and started the pottery tour and it’s been a hit ever since,” he said.

Every year the pottery tour grows and this time around 12 artists showcased their pottery. But some had to travel miles to get here.

This tour helps potters get their name out there, while earning extra cash.

David Gamber, who traveled from new jersey to make it here, has been doing pottery for over 30 years. He explains that this tour is more than just an opportunity to sell his pottery.

“Well you always hope to sell a lot of stuff, because you have to pay the bills, but the nice thing about this is even if you’re not having the best of days there’s that community that makes it fulfilling.”

These potters use the same materials among each other, but don’t use same skill making every piece different and one of a kind.

Sunday is the last day for this tour---but Michiana pottery does have a Facebook page with more details.