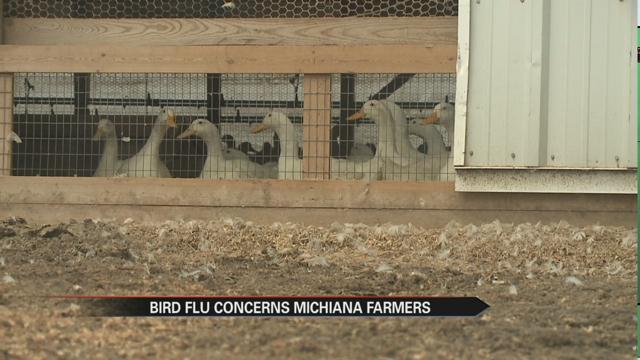 In Iowa, more than 3 million birds were infected by a bird flu outbreak this week.

Several other states also reported cases of the virus.

Many poultry farms in Michiana are prepared to protect their flocks.

Staff at Culver Duck Farm say they're concerned but not worried about this threat.

If an outbreak happens, managers say they're prepared to stop the contamination before it reaches your plate.

"We are very concerned about the situation, we're monitoring, we're testing but there are also plans in place to take care of any outbreaks that may happen in the area,” said Drew Frey, Live Production Manager for Culver Duck Farms

The facility oversees 100,000 birds on an average week, reaching hundreds of stores around the country.

That's why the health of the ducks is top priority.

“Every flock that's in the field, we test and monitor for Avian Influenza specifically,” said Frey.

The virus was originally spread by wild birds.

Culver's is doing all it can to keep these ducks isolated from threats.

“We're on the ground level and we know there's no guarantees for preventing but we're taking every precaution that we can,” Frey said.

More than 6 million birds were contaminated and had to be put down.

Concerns the virus could infect humans prompted a response from the Center for Disease Control.

“While we are cautiously optimistic that there will not be human cases, we must be prepared for that possibility," said Alicia Fry, Medical Doctor for the CDC during a press conference. "And we are taking routine preparedness steps including studying the virus further including candidate vaccines that can be used to make a vaccine for people if needed.”

But Frey says consumers can also protect themselves from this potential epidemic by properly cleaning and cooking their poultry dinners.

“Heat up the food to proper temperatures and that will eliminate salmonella, bacteria, and viruses and that's my encouragement to the consumer," he said.