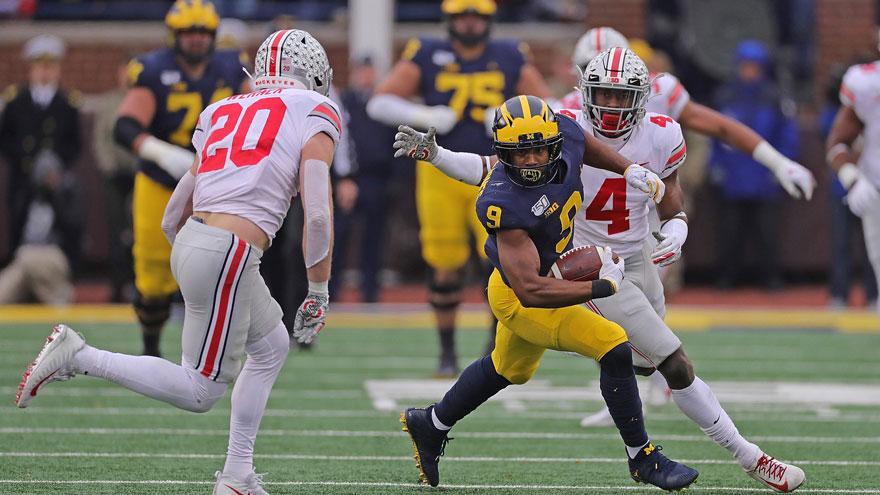 (CNN) -- One of college football's biggest rivalry games won't be played this year.

Saturday's scheduled football game between rivals Michigan and Ohio State has been canceled due to ongoing coronavirus issues within the Wolverines program.

The two Big Ten Conference teams have played "The Game" every season without disruption since 1918.

Michigan said in a statement that increasing coronavirus cases and multiple players in quarantine forced the team to make the decision to cancel the game, scheduled to be played in Columbus, Ohio.

"The number of positive tests has continued to trend in an upward direction over the last seven days," Michigan Director of Athletics Warde Manuel said.

"Unfortunately, we will not be able to field a team due to COVID-19 positives and the associated quarantining required of close contact individuals."

Ohio and Michigan are among the 31 states that have had a daily positivity rate above 10% over the last seven days.

Last week, the Wolverines halted all football activities due to Covid-19 cases among players and canceled last Saturday's game against Maryland. Michigan said that it would continue daily testing in the hopes of getting cleared to get back on the practice field.

Michigan has a 2-4 record while Ohio State is 5-0. The Big Ten's Champions Week is scheduled for December 18-19. However, the conference has set a threshold of six games played to qualify for the conference championship game against Northwestern.

Big Ten athletic directors are meeting on Wednesday to discuss the possibility of changing the qualifier, according to ESPN.

"The Michigan-Ohio State rivalry is one of the most important rivalries in all of sports," the Big Ten said in a statement. "The conference shares the disappointment of our student-athletes, coaches, administrators, partners and fans. The conference is committed to transparency and will continue to collaborate with its member institution stakeholders to determine Big Ten Football Championship Game participation requirements as well as tiebreakers."