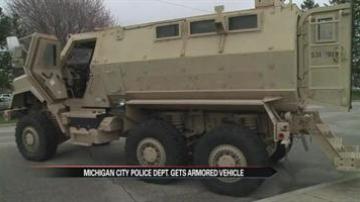 MICHIGAN CITY, Ind. -- Michigan City Police just received a new vehicle for the SWAT team that was donated by the US military as part of the Section 1033 federal surplus program.

The MRAP (Mine Resistant Ambush Protected) is 11-feet tall and can travel up to 65-miles per hour.

"It's just another tool in our tool box for special operations. We could always use something like this if the need arises," said Jeff Piotrowski, Michigan City Police SWAT Commander.

The SWAT team is excited to have this new piece of equipment.

"It's worth over a quarter of a million dollars and we got it pretty much for free," said Piotrowski.

The M-RAP was donated by the US military as part of the Section 1033 federal surplus program.

The program donates military vehicles to agencies across the country.

You might be wondering whether or not the Michigan City Police needs a military vehicle.

"This is a tool we probably will never need and I hope we never do need it but at least if we do, we have it now in our availability," said Detective Steve Forker, assistant SWAT team leader.

"Whether it's an active shooting situation, a hostage rescue, something like that that would protect the officers going up to the scenario," said Piotrowski.

The upkeep is pretty simple.

"The government gave us 12 extra tires. But other than minor maintenance, and an oil change here and there, that's pretty much it," said Piotrowski.

Officers are currently being trained on using the MRAP.