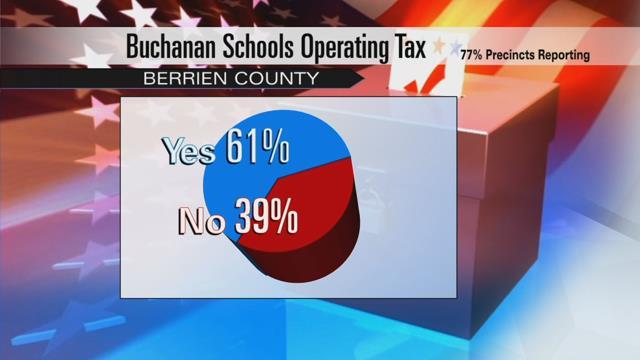 In Cass County, no democrats ran for sheriff and it was Republican Richard Behnke who got the most votes.

Behnke is expected to replace current Cass County Sheriff Joseph Underwood who will retire in December after serving as chief since 1993.

In Niles, it was the youngest out of the three candidates vying for Mayor Mike McCauslin’s position, that took home the most votes.

McCauslin was the mayor of Niles since 1999 but decided not to run for reelection.

Taxpayers in Coloma voted to continue and increase the road tax for another 4 years through 2019.

In Berrien County, taxpayers approved a renewal for the county's 911 budget.

The four-year renewal will pump about $3.3 million each year into the county's 911 system.

This levy will run for four years and generate about $2.6 million each year.

Residents in the school district will pay slightly more in the coming years.

The tax will generate just over $2 million a year to help out that school district.