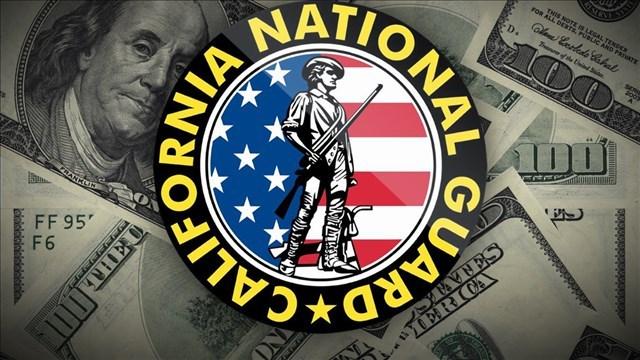 (CNN) -- Master Sgt. Susan Haley's family is the epitome of military sacrifice. She's a 24-year veteran. Her husband served for 26 years. Their son lost his leg serving in Afghanistan.

But now, the California National Guard is demanding more sacrifices from her -- to the tune of $650 a month.

"$650 is a quarter of our monthly income. And you just can't all of a sudden come up with that money," Haley told CNN's "New Day" on Tuesday. "We have depleted our savings."

Haley is one of thousands of veterans being forced to repay millions of dollars in re-enlistment bonuses after the California National Guard awarded the bonuses in error. Years later, officials realized many of the veterans were not actually eligible for the bonuses and said they wanted that money back -- with interest.

Christopher Van Meter earned a Purple Heart for his service in Iraq, where he was hurled from an armored vehicle. But he, too, is making enormous sacrifices for the state Guard's mistake.

"We were paying upward $1,300 a month back to that recoupment," he said. "We weren't able to afford everything -- food for the kids, a day care."

The California National Guard and several members of Congress say they would love to see the debts waived. But so far, no one has made that happen.

How did this mess start?

In 2006, at the height of the Iraq and Afghanistan wars, the Pentagon enticed soldiers to re-enlist by offering hefty bonuses. Haley and Van Meter both accepted $15,000 bonuses to extend their service.

But only soldiers with certain assignments -- for example, intelligence, civil affairs and some noncommissioned officer posts -- were supposed to get bonuses, the Los Angeles Times reported.

"I was completely and totally in shock. I couldn't believe they were doing this to me," Haley said. "They said that I had received these monies in violation of federal law. They were very accusatory and very demanding and aggressive."

Both Haley and Van Meter said they appealed, but to no avail.

Why not just waive the debts?

Rep. Mark Takano, a senior member of the House Committee on Veterans' Affairs, said he wants all the repayment demands stopped -- but wasn't sure exactly how to make that happen.

"We've been trying to sort this out ever since the story was broken over the weekend," the California congressman told CNN's "New Day" on Tuesday. "We weren't clear whether the Department (of Defense) had authority on its own, or whether we actually had to address this statutorily."

Defense Department spokesman Capt. Jeff Davis said the military can waive individual repayments on a case-by-case basis, but doesn't have the authority to issue blanket waivers.

The California National Guard also said it doesn't have the authority to ignore the debts -- even if it wants to.

"The bonus audit and recoupment process is a federal program governed and adjudicated by the National Guard Bureau and the Department of the Army. The California National Guard does not have the authority to unilaterally waive these debts," it said in a statement.

"However, the California National Guard welcomes any law passed by Congress to waive these debts. Until that time, our priority is to advocate for our soldiers during this difficult process."

"We are working with Congressional leaders to support a provision in the National Defense Authorization Act (NDAA) that provides relief to soldiers," the CMD said in a statement. "That vote is expected to take place at the end of the calendar year."

"When she pleaded guilty, Jaffe admitted that from the fall of 2007 through October 2009, she routinely submitted false and fictitious claims on behalf of her fellow California National Guard members," the DOJ said in a statement.

"Jaffe admitted that she submitted claims to pay bonuses to members of the California National Guard whom she knew were not eligible to receive the bonuses and to pay off officer's loans, even though she knew the officers were ineligible for loan repayment."

About 40 soldiers were also disciplined. "In short, they knew they didn't qualify for a bonus and accepted one anyway," the CMD said.

Van Meter, the Purple Heart recipient, was floored when he got a letter saying he owed a combined $46,000 -- including the $15,000 reenlistment bonus, a student loan and an officer bonus.

"They tacked on a 1% processing fee into that," he said.

Van Meter said after he retired in 2013, he was given three years to pay off the debt. Eventually, he and his wife refinanced their mortgage to pay off the surprise debt.

According to the Los Angeles Times, the California Guard has told 9,700 current and retired soldiers to repay some or all of their bonuses.

But Col. Michael Piazzoni, commander of the Soldier Incentive Assistance Center -- which performed the audit -- said the number is actually lower.

Struggling to keep her house

Haley, the master sergeant who has lost her savings, said she now has difficulty paying the mortgage.

"We're having problems making our house payments ... and I haven't even paid my bill for the Army yet because we just don't have the money," she said.

"We're making sacrifices for our children and cutting back on just everything. And we already had a tight budget to begin with."