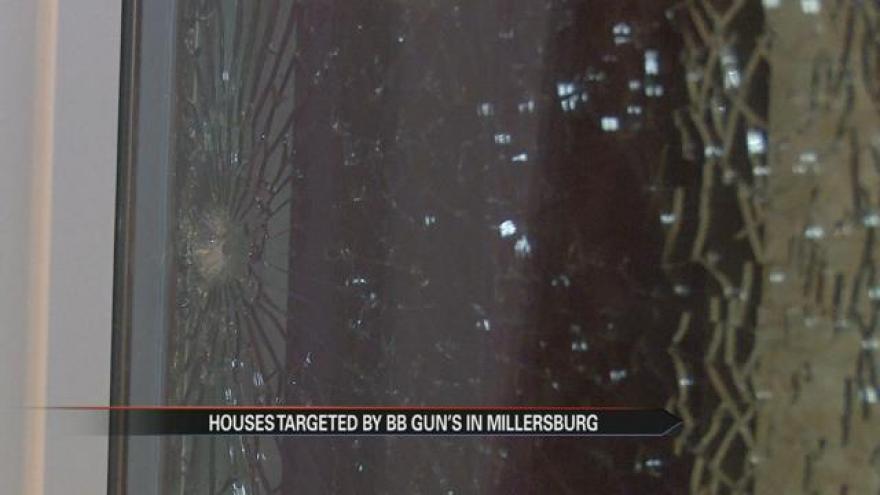 10 houses were shot by a BB or pellet gun in the last week in Millersburg. Now, police are asking for your help in catching the culprit.

Police say all the houses hit are within four blocks of one another.

Terry Stidham was sitting right on his couch watching TV last Friday night, when someone shot his front window.

“I really didn’t see nobody or thought no more of it until the next day when my son saw the holes in the window,” he said.

They have three in their front window.

Terry and Chris became the first of 10 victims whose houses have been shot in the past week in Millersburg.

The Marshall said that one of the odd parts about these crimes is that they haven’t been able to find any BBs or pellets left at any of the scenes.

“At first you would think people were in the vehicle driving around, but now perhaps they’re walking to get to the backs of houses,” said Millersburg Marshall Alan Mackowiak.

They saw two holes that completely shattered the glass door.

“It’s a little scary. We’ve lived here since 93 in this community, and nothing like that’s happened,” said Chris.

But they say in this small town, they’re confident someone will speak up.

Police still do not have any leads, so they’re asking you to share any information you may have.

You can call the Millersburg Police Department at 574-642-4500, Crime Stoppers at 574-288-STOP, or leave a tip for the Elkhart County Sheriff’s Department by clicking here.