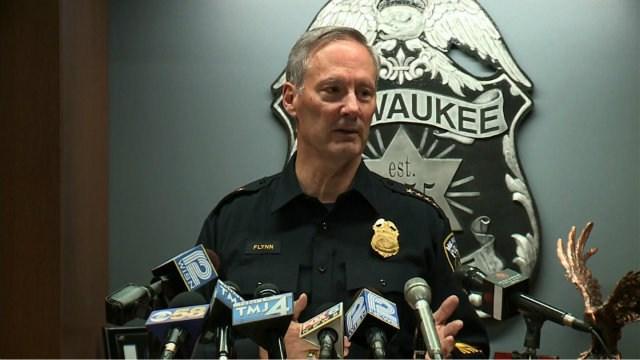 (CNN) -- The Milwaukee cop who fatally shot Sylville Smith in August watched television coverage of the violent street protests that followed at a bar with a man who later accused the officer of sexual assault, according to a criminal complaint.

The unidentified man told police that Officer Dominique Heaggan-Brown sexually assaulted him while off-duty two days after the August 13 shooting death of Smith, a 23-year-old black man who police said was armed during a lethal confrontation that started with a traffic stop.

Heaggan-Brown, 24, who has been suspended from the force, was being held on $100,000 bail Thursday, CNN affiliate WDJT reported. It's unclear whether he has an attorney.

The alleged sexual assault occurred in the early morning of August 15 after a night of heavy drinking at a bar where the two men "sat and watched television as coverage of the Sherman Park protests aired," the criminal complaint said.

After allegedly assaulting the man at the officer's home, Heaggan-Brown took the accuser to a hospital and told a nurse the man "began to act weird and unresponsive" at a bar, according to the complaint.

Heaggan-Brown told a hospital security officer that the man was "completely out, zonked out of his gourd" after drinking, the complaint said.

Later, after seeing Heaggan-Brown in the emergency room, the man told hospital workers, "He raped me. He raped me," according to the complaint.

What authorities say happened at bar

Heaggan-Brown later that morning sent a text message to a sergeant who had mentored him, saying he was "not so good" after having "a separate situation," the complaint said.

When the sergeant met with Heaggan-Brown, the officer described the sex as consensual and said the accuser "was drunk and had 'medical issues,'" according to the complaint.

Heaggan-Brown is charged with two counts of second-degree sexual assault, two counts of prostitution and one count of capturing an intimate representation without consent. He's accused of offering two other men money for sex at his home, the complaint said.

The complaint said Heaggan-Brown and his accuser, both musicians, had connected on Facebook. At the bar the night protests rocked Sherman Park, the officer had "bragged about being able to do whatever the defendant wanted without repercussions."

Police said Heaggan-Brown handed over his phone to investigators and let them search his home, but most of his belongings had been moved out.

In addition to a criminal investigation, the internal affairs division will review the case.

Mike Crivello, president of the 1,600-member Milwaukee Police Association, said in a statement: "In any large organization there may be a time that one, or a few discredit the overall; this is by no means reflective of the overwhelming majority of good officers. The MPA condemns all criminal behavior by any member of society, whether part of this organization or not -- in all situations it is imperative that fact(s) are allowed to dictate the outcome."

Milwaukee, a city long torn by racial tensions, exploded with protests in August after Smith was shot after running from police during a traffic stop. Heaggan-Brown also is African-American.

Heaggan-Brown rose from a police apprenticeship program to became a cop on the rough-and-tumble streets of the city's northwest side.

After the shooting, the officer's name and photo were widely circulated on social media, with angry comments from people threatening to have him killed.

Some online posters described encounters with what they said was an overzealous officer.

Heaggan-Brown has six years of service with the Milwaukee police -- three as an officer, officials said. He entered the department as part of an apprentice program that recruits high school students and requires they complete college credits.

He was assigned to District 7 on Milwaukee's northwest side.

Heaggan-Brown was placed on administrative duty during an investigation into the August shooting.

Mayor Tom Barrett said police body camera footage showed Smith holding a handgun during the encounter. That video has not been released.

Police said the officer shot Smith after he failed to comply with orders to put his gun down, which was loaded with 23 rounds -- more than the officer was carrying.

Smith -- described by family as a caring father, a loyal friend and popular dancer in Milwaukee's thriving hip-hop scene -- was known to Heaggan-Brown before the fatal encounter in August, Smith's relatives and friends said at the time.