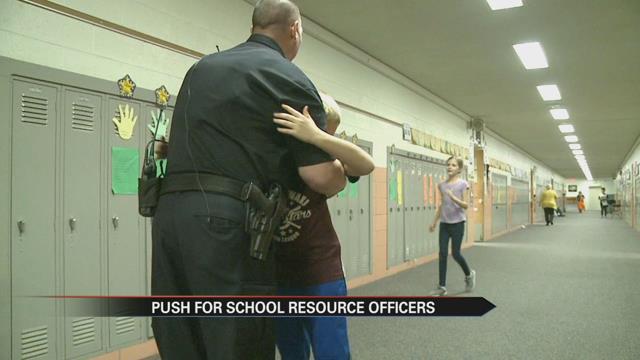 Over $5 million in Indiana state funding were recently restored to the Secured School Safety Grant program. With more resources, more districts will be able to keep school resource officers on the payroll.

This comes after scrutiny of school resource officers because of a viral video out of South Carolina The feds are still investigating the South Carolina cop who was fired after he grabbed a 16-year-old student by her neck, flipped her desk, dragged the student, and tossed her around her classroom.

In the Mishawaka School District officers go through extensive hours of training to prevent those types of situations from happening.

They are confident that having SROs at the elementary school will give young students a positive image of police officers.

“Every day I look forward to coming in and seeing these children and building up the relationship because they are very important. These children are our future,” says Lieutenant Tim Williams of Mishawaka Police Department.

Lt. Williams has been an SRO in Mishawaka schools for over 10 years but in 2013 the Secured School Safety Grant allowed the SROs to expand into the elementary schools.

“There is a level of safety to both the student and the staff and the parents that you wouldn’t have otherwise if they weren’t present in the building,” says Dr. Theodore Stevens as Assistant Director for the School City of Mishawaka.

Dr. Stevens says since they were recently approved for grant money for 2016 the school district will be able to perform a threat assessment, update security software, and keep what they consider their most valuable players.

“School resource officers are something we want and if could afford more we would certainly look to add more,” says Dr. Stevens.

As more and more officers who are used to dealing with criminals enter the class rooms how are they making sure respect is a two way street even with the most unruly of kids?

“We will go to class with that child, we will sit down and draw a picture with that child in an art class or read them a book. You‘re not just being a police officer you are being a mentor,” says Lt. Williams.

SROs in Mishawaka attend close 180 hours of training and interview with both the police department and the schools.

Lt. Williams adds his officers are not there to catch kids acting out or committing crimes.

“The goal is to make sure we get our children back on the right track so they can become successful,” says Lt. Williams.

There are four SROs in Mishawaka. The one at the middle school and the one at the high school are funded through the police department. Grant money helps keep the two patrolling the seven elementary schools.