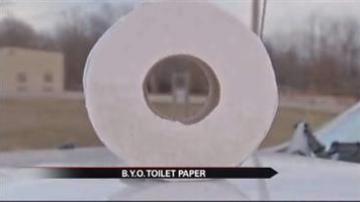 WINDSOR, Mo. — Budget cuts have hit one small Missouri town especially hard. So much so, they have had to cut back on the toilet paper supply.

During a city meeting, a woman notified city officials about the situation and asked if she could do some toliet paper fundraising.

Workers had been told to bring their own toliet paper because they were using too much and had gone over budget.

The city's mayor is now making sure toliet paper is being provided for the men.