More than 1,000 people have already downloaded plans to 3-D print an AR-15 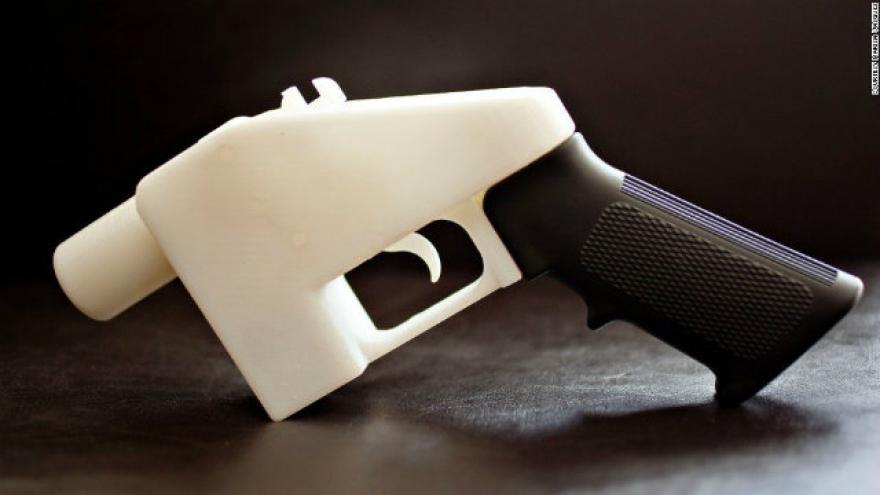 A settlement between gun-rights activists and the government has cleared the way to post plans for 3D printed guns online. Photo courtesy Marisa Vasquez

By Doug Criss and Kimberly Berryman

(CNN) -- Under a court settlement, people aren't supposed to be able to legally download plans for 3-D printed guns until Wednesday.

But because designs for the guns have already been posted online, by Sunday more than 1,000 people had already downloaded plans to print an AR-15-style semiautomatic assault rifle, according to the office of Pennsylvania Attorney General Josh Shapiro.

Shapiro has been fighting to keep 3-D printed guns out of Pennsylvania. At an emergency hearing held over the phone Sunday, the attorney general's office asked a judge for a restraining order that would block a website run by gun-rights group Defense Distributed from being accessible in Pennsylvania. The group's site allows people to download plans to make 3-D guns.

At the hearing, Defense Distributed agreed to block Pennsylvania IP addresses for a few days until a more formal hearing could be held.

Josh Blackman, a lawyer for Defense Distributed, told CNN on Monday that more than 1,000 AR-15 gun plans have been downloaded but wouldn't confirm Shapiro's claim that they were only downloaded since Friday.

"This is a free speech case. This isn't a gun case," said Blackman, who challenged Pennsylvania's efforts to block the downloads. "One state cannot censor the speech of a citizen in another state."

Pennsylvania isn't the only state trying to bar access to 3-D printed guns. Washington Attorney General Bob Ferguson announced Monday he is leading a lawsuit in eight states and the District of Columbia to block a court action that would let people download plans for untraceable 3-D printed weapons. This lawsuit is being filed in federal court in Seattle.

These latest battles flared after Defense Distributed, a Texas-based group, reached a settlement in June with the government that will allow it to post 3-D printable gun plans online. According to the settlement, the plan wasn't supposed to be online until Wednesday, but Shapiro said that Defense Distributed put them out over the weekend.

The settlement ends a multiyear legal battle that started when Defense Distributed founder Cody Wilson posted designs for a 3-D printed handgun he called "The Liberator" in 2013. The single-shot pistol was made almost entirely out of ABS plastic -- the same material Lego bricks are made from -- and could be made on a 3-D printer.

The State Department told Wilson to take down the plans, saying it violated the International Traffic in Arms Regulations, which regulate the export of defense materials, services and technical data. In essence, officials said someone in another country -- a country the United States doesn't sell weapons to -- could download the material and make their own gun.

Wilson complied, but said the files already had been downloaded a million times. He sued the federal government in 2015.

The settlement says Wilson and Defense Distributed can publish plans, files and 3-D drawings in any form and exempts them from the export restrictions. The government also agreed to pay almost $40,000 of Wilson's legal fees and to refund some registration fees.

"As the chief law enforcement officers of our states, we believe the settlement terms and proposed rules are deeply dangerous and could have an unprecedented impact on public safety," the letter said. "In addition to helping arm terrorists and transnational criminals, the settlement and proposed rules would provide another path to gun ownership for people who are prohibited by federal and state law from possessing firearms."

Do-it-yourself firearms like The Liberator have been nicknamed "Ghost Guns" because they don't have serial numbers and are untraceable.

On the website run by Defense Distributed, people can download plans for building the Liberator, as well as files for an AR-15 lower receiver, a complete Baretta M9 handgun and other firearms. Users also will be able to share their own designs for guns, magazines and other accessories.

The site on Monday showed more than 12,000 downloads of seven models of guns.

The high-end 3-D printers needed to make such weapons cost thousands of dollars and may be too expensive for most people. But that doesn't ease the concerns of those who think 3-D printed guns are a really bad idea.

Three-D printed guns will make it easier for terrorists and people who are too dangerous to pass criminal background checks to get their hands on guns, said Avery Gardiner, the co-president of the Brady Campaign to Prevent Gun Violence.

Pennsylvania Gov. Tom Wolf said he was stepping in where the federal government had failed to protect his state's citizens.

"The threat of untraceable guns in the hands of unknown owners is too daunting to stand by and not take action," Wolf said. "Attorney General Shapiro and I will fight to protect Pennsylvania families and children. The federal government has abdicated its responsibility to keep our citizens safe, but we will not be deterred from working to ensure Pennsylvania safety laws are followed and our residents are protected from these dangerous weapons getting in the wrong hands."