More than 250 people reunite to remember their beloved Pastor King 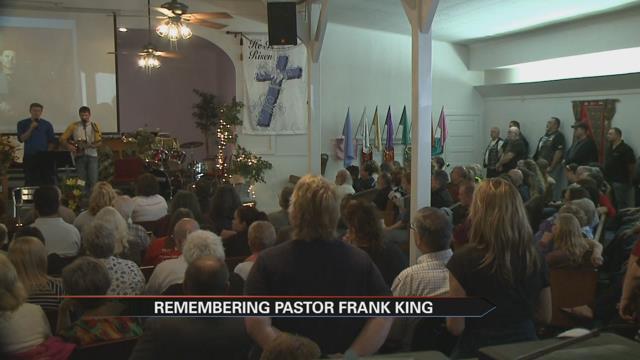 More than 250 people flocking to Guidance Ministries to celebrate and remember the life of a beloved pastor. ABC57 first brought you the sad news the Pastor Frank King was killed in a motorcycle accident on Tuesday. His family friends and bike crew all joining together in remembering.

Pastor King had a history with drug abuse and homelessness, but turned his life around. The man who first hired Pastor King said he could go on and on about missing his friend, but within that void there’s joy.

“The joy is knowing where he’s  in heaven,” said Jim Christophle, the one who first hired King.

Pastor Jim Mentz  lead today’s memorial and encouraged others to follow his transformation.

“Do that. Do what he did. Amen? Put yourself out there,” said Pastor Mentz.

Pastor King’s bike crew members attended and one of them explained he was a man that valued his family and his religion.

“There won’t be another person like him in the world again,” said Dave Davidson. “He was a very passionate man.”

After smiles, tears, laughs and applause, Nathan, Pastor King’s son said he was devastated when he found out about his dad’s death, but is amazed at how many people showed up.

“He was an amazing man. He was everything,” he said.

That man who started Pastor King’s transformation spoke about the first encounter he ever had with him.

“I looked at him and said, ‘Frank, God has a call on your life and if you really want to get it together come live with me,’” said Pastor Ron Surgener.

Among those who were Pastor King’s friends was his wife, Lori King.

“My husband is an awesome man of God and I’m glad  I got to walk that journey with him for 25 years,” she said.

Some at this memorial say they will continue moving forward cherishing  the thought of meeting Frank again.