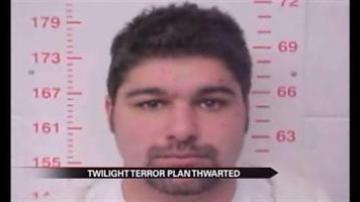 BOLIVAR, Mo. -- It was a movie massacre that could have been but the potentially deadly plot was stopped by a mother who turned her son in.

The mother of 20-year-old Blake Lammers from Missouri alerted police on Thursday that she was concerned her son was plotting a copycat shooting to the Aurora Dark Knight Rises rampage.

Lammers confessed to police that he purchased two assault rifles, 400 rounds of ammo, and a ticket for one of Sunday's showings of Twilight.

He said he planned a mass shooting at the Breaking Dawn premiere and now his friends can't believe what almost was.

"I was shocked. I mean he was in our house, I was really close to him. I was with him and I helped him sight his rifles. He told me we were doing it for hunting," said Ethan Mason, a friend of Lammers.

"Well, I was going to go over there and watch Twilight Breaking Dawn with my family and friends. It's kind of scary hearing this now. Especially in a small town like Bolivar," said Richard O'Keefe, a Bolivar resident.

Lammer's mom said her son was mentally ill and off his medication.