Mother sentenced for murder of son, injury to daughter 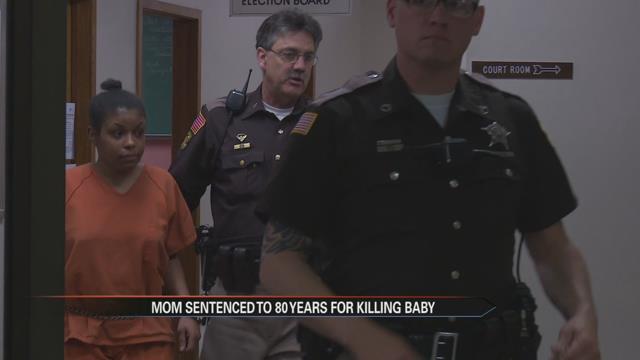 The woman who killed one of her children and left the other in a vegetative state was sentenced on murder, battery, aggravated battery and neglect of a dependent.

Nyesha Crockett was sentenced to 80 years in prison on Friday afternoon.

She was convicted of killing 11-month-old Micahyah Crockett, who died on September 1, 2014.

She was also convicted for inflicting the injuries that left her daughter Alaiyah Crockett hospitalized with permanent injuries. Those injuries happened in February 2014 when Alaiyah was 14-months-old.

Judge Miller had strong words for Crockett during sentencing.

She told Crockett she couldn't imagine a worse fate for her daughter and that she failed her responsibility to her children and society.

Crockett was sentenced to 20 years for the battery charge and 60 years on the murder charge, to be served consecutively.

Crockett was found guilty on all charges in April.