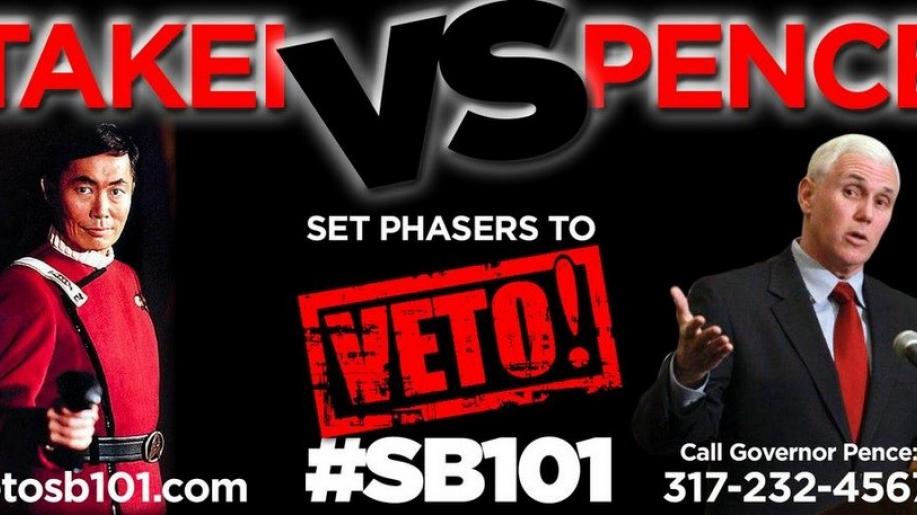 A movement that is calling for the halt of the so-called Indiana religious freedom bill is growing. The controversial bill, SB 101, is on its way to Governor Mike Pence's desk for a final signature after it was recently passed by Indiana lawmakers.

Several businesses in Indiana, mainly in Indianapolis, have started displaying blue stickers on their windows to let patrons know that they will serve anyone, regardless of religion or lifestyle. The stickers were created by an organization called "Open for Service."

The organization's founder says he's shipped stickers all over Indiana, as well as far-away states like New York and Alaska.

Actor and famous LGBT activist, George Takei, has even taken to Facebook in an effort to tell Governor Pence to veto the bill.

In part, Takei said if the bill "goes into effect, Indiana will be marked as a state where certain people are not welcome. And so we will not visit. We will not spend."

The post goes on to give Governor Pence's office phone number and a request for everyone to call his office and ask for a veto. Following that request, several reports on social media indicated that Governor Pence's voice mail was shut down, seemingly due to an influx of phone calls.

The social media post sparked a campaign called "Takei VS Pence," which has garnered thousands of signatures by people from all over the country.

Those in favor of the passage of SB 101 say business owners likely won't use the law to discriminate, but rather to protect their religious freedoms.