MSP: Driver suspected of driving over murder victim turned himself in 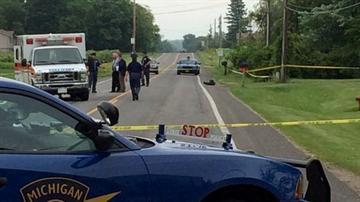 STEVENSVILLE, Mich. -- According to the Michigan State Police, the driver who ran over 41-year-old Delaina Tripp's body early Monday morning turned himself in Tuesday morning.

They discovered Delaina's body in the road.

Police said her husband, David Tripp, shot Delaina, then went behind their house and shot himself.

Police said it appeared someone had struck Delaina's body, but did not stop.

The driver turned himself into police Tuesday morning.

Police have inspected the driver's vehicle and have interviewed him.

They have forwarded information to the prosecutor's office for review but do not expect the driver to be charged.

He told police he stayed on scene until police arrived with guns drawn.