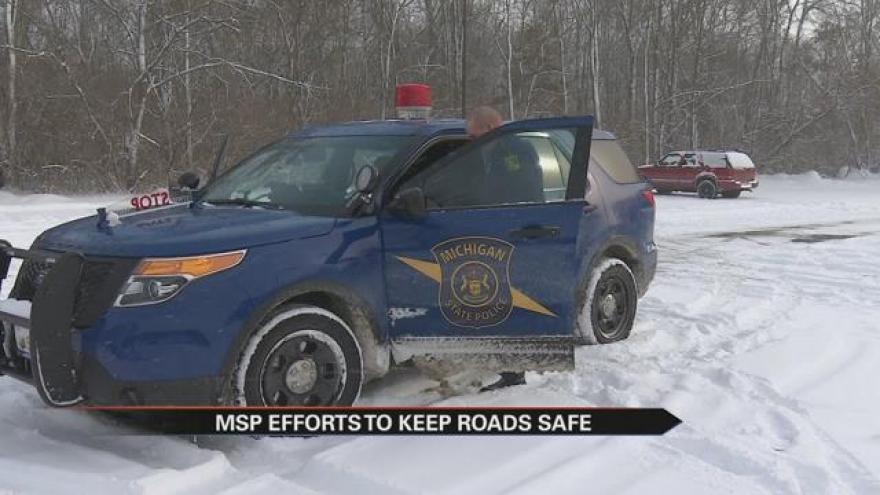 The slow and steady snow this week has made roads really tricky to navigate.

“It’s just not creating enough space and not leaving enough time to get to where they need to be,” Michigan State Police Trooper Anthony Young said during a ride-along with ABC57’s Taylor Popielarz Friday afternoon.

Space and time are two key components to staying safe on the roads in the winter, according to Young.

“Slow down,” he said. “Give yourself plenty of time to get to where you need to be. And then just leave a little extra distance between you and the vehicles around you; the vehicle in front of you.”

Young recommends keeping about five car lengths between you and the vehicle in front of you in snowy weather.

He said while a road may look clear, black ice is deceiving.

“It looks normal, but it’s just as slippery as being on an iced over lake,” Young said.

If you find yourself driving in whiteout conditions like we were Friday afternoon, Young said slowing down and leaving space between you and other vehicles is necessary.

“And if it gets to the point where you think it’s too bad, pull into a parking lot; pull into some place safe and wait it out,” he said.

Friday’s ride-along was pretty uneventful until an accident happened on I-94 West near Sawyer.

A semi and pickup truck bumped into each other on the snowy road.

Everyone was OK, but the truck had to be towed away.

“If you’re on black ice or a sheet of ice, four wheel drive doesn’t do you any good if all four wheels are spinning,” Young said.

And if you find yourself in a whiteout, or just feel unsafe driving on a highway, Young said pulling over is the wrong decision.

“It’s really not safe to pull off on the freeway in a whiteout condition because people really can’t see you,” he said. “And if you’re stuck on the shoulder of the road and you can’t tell where the lines are at, there’s a good chance you can get hit.”

Some other tips for you and your family:

- If your car starts to slide, don't press the brake. Ease off the gas and turn into the skid or toward the roadway.

- Avoid changing lanes while on snow-covered highways, if possible. If you have to change lanes, lay off the gas pedal while changing.