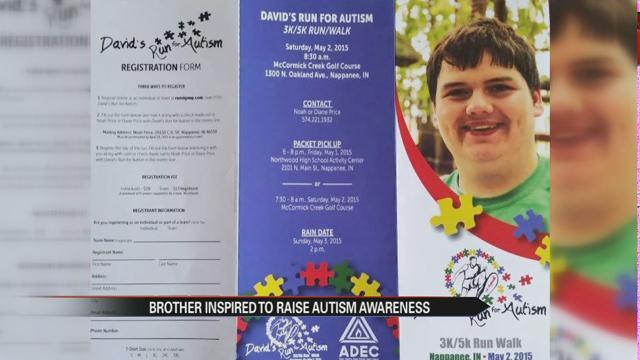 A 16-year-old boy from Nappanee is finishing up the final touches on a race he has been planning for months and it is all for his younger brother.

David's Run for Autism will be held Saturday at 8:30 a.m. at the McCormick Creek Golf course. The goal is to raise awareness for the developmental disorder and this isn't the first autism activism role Noah Price has taken on.

“We play music a lot. He likes playing piano and he is really good at playing piano,” says Noah Price, a sophomore at NorthWood High School in Nappanee.

The two brothers enjoy spending time together playing, running, being outside, and even baking cookies.

“I think once he was diagnosed I think that bond grew a little bit stronger and once Noah got older he realized David wasn't the typical child,” says Diane Price, mother of Noah and David.

Diane says David was diagnosed with autism at age three and didn't speak until he turned 12.

“I remember times when we would go into a store and David would have a meltdown he would fall on the ground and scream. We don't know what set it off. But you know people would walk by and give us dirty looks like we were bad parents,” says Diane.

After experiencing these public episodes Noah began a journey to inform the public of exactly what it is like to have a brother with autism.

“It's been a blessing. It challenges me in a way that some people may not understand,” says Noah.

This past fall Noah began educating his community by wearing flashy socks to his cross country meets. The socks are patterned with the autism symbol of puzzle pieces.

“People started talking to me about the socks and what they meant and how could they get them,” says Noah.

After the selfless trend caught on, Noah then targeted a wider audience. He started a Facebook page dedicated to his relationship with David. He has 433 followers reaching as far as Canada.

“I want to let people know what it's like to have a brother with autism and about their development throughout life and how they can become successful like David,” says Noah.

Diane says the smiling and talkative David here today has progressed leaps and bounds. A message of steady, meaningful progression is exactly what Noah hopes to share.

The price family says they have over 300 people signed up for “David's Run for Autism.” Registration is open until Saturday at 8:00 a.m.

The race cost $20 and all proceeds will go to the advocacy organization, Autism Speaks.

For more information on “David's Run for Autism” click here.