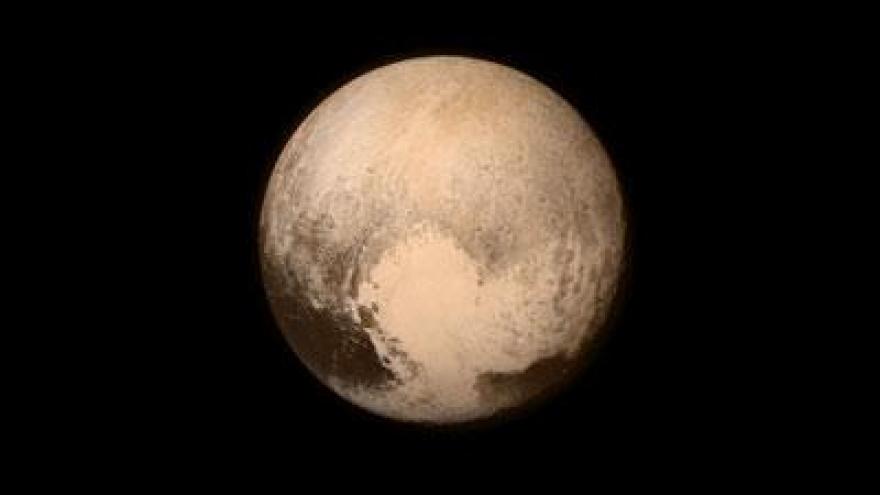 (CNN) -- NASA says its New Horizons spacecraft completed a historic flyby of Pluto on Tuesday, becoming the first spacecraft to pass over the small, icy world.

The unmanned, piano-size spacecraft went over Pluto at 7:49 a.m. ET, at which time it was expected to be traveling nearly 31,000 mph about 7,750 miles from Pluto.

It's the first mission to Pluto and its five moons.

"I have to pinch myself," said Alice Bowman, the mission's operations manager. "Look what we accomplished."

Because the spacecraft will be busy gathering data during its flyby, it won't phone home to update its status until around 9 p.m. ET Tuesday.

"That's going to be a very highly anticipated event," Alan Stern, the mission's principal investigator, said at a briefing Monday.

The wait will be a tense one.

"There's that small element of danger, so I think we're all going to breathe the final sigh of relief at 9 p.m., and that's when we can really call it a successful flyby," Stern said.

When will you see photos from the flyby? It takes four hours for the probe to get a signal back to Earth, and then NASA has to process the data. NASA has released images of Pluto before, and mission managers expect the images from the New Horizons close encounter to be released online and on NASA TV at 3 p.m. ET Wednesday.

Scientists on Monday said New Horizons already has settled one debate about Pluto -- its size. Information gathered by the probe indicates Pluto is 1,473 miles (2,370 kilometers) in diameter. That's somewhat bigger than earlier estimates, and it means Pluto is larger than all other known solar system objects beyond the orbit of Neptune.

The probe already has beamed back several crisp photos of Pluto and its largest moon, Charon.

"Pluto and Charon are both mind-blowing," Stern told CNN on Saturday. "I think that the biggest surprise is the complexity we're seeing in both objects."

The mission completes what NASA calls the reconnaissance of the classical solar system, and it makes the United States the first nation to send a space probe to every planet from Mercury to Pluto. The probe traveled more than 3 billion miles to reach Pluto.

"I think it's fitting that on that 50th anniversary we complete the initial reconnaissance of the planets with the exploration of Pluto," he said Tuesday.

"But stay tuned," he added. "Because our spacecraft is not in communication with the Earth. We programmed it to be spending its time taking important data sets that it can only take today."

Why go to Pluto?

New Horizons' core science mission is to map the surfaces of Pluto and Charon. It also will study their atmospheres.

The spacecraft was launched on January 19, 2006, before the big debate started over Pluto's status as a planet. In August of that year, the International Astronomical Union reclassified Pluto as a dwarf planet.

But Stern disagrees with the IAU's decision.

"We're just learning that a lot of planets are small planets, and we didn't know that before," Stern said earlier. "Fact is, in planetary science, objects such as Pluto and the other dwarf planets in the Kuiper Belt are considered planets and called planets in everyday discourse in scientific meetings."

New Horizons has seven instruments on board to help scientists better understand how Pluto and its moons fit in with the rest of the planets in our solar system.

The planets closest to our sun -- Mercury, Venus, Earth and Mars -- are rocky. Jupiter, Saturn, Uranus and Neptune are gas giants. But Pluto is different: Even though it is out beyond the gas giants, it has a solid, icy surface.

The probe won't orbit Pluto and it won't land. Instead, it will keep flying, heading deeper into the Kuiper Belt, a region that scientists think is filled with hundreds of small, icy objects.

"The universe has a lot more variety than we thought about, and that's wonderful," Stern said. "The most exciting discoveries will likely be the ones we don't anticipate."

Stern said mission managers will decide later this year where to point New Horizons for the next part of its journey.