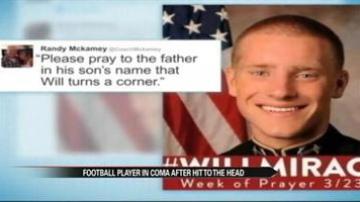 A star college football player died several days after he was hit in the head.

Will McKamey played on the United States Naval Academy’s team.

He was knocked unconscious during practice and underwent emergency surgery Sunday night to relieve pressure on his brain.

This is not the first time he has had a brain injury while playing football. In 2012 he also had a serious injury on the field but was back on the field less than a week later.