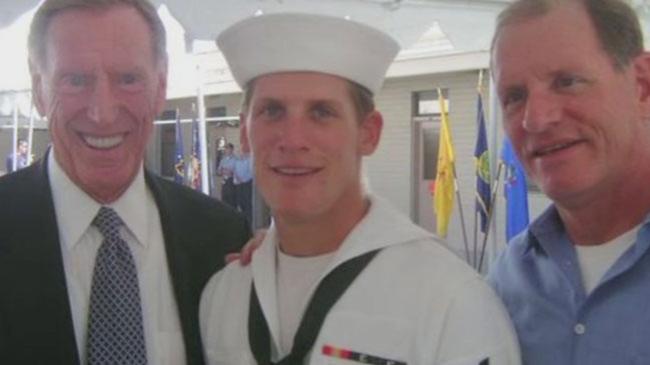 "He is our family hero in every sense of the word," cousin Elizabeth Ann Keating told CNN.

Keating, 31, is the third American combat casualty since the U.S. redeployed forces to Iraq in the summer of 2014 to advise local forces and conduct special operations against ISIS. He was an adviser to Kurdish Peshmerga forces fighting ISIS, Pentagon spokesman Peter Cook said in a statement Tuesday.

He died as a result of a "coordinated and complex attack" by roughly 100 ISIS fighters nearly 30 km (18.6 miles) north of Mosul, Pentagon officials confirmed Tuesday.

"This sad news is a reminder of the dangers our men and women in uniform face every day in the ongoing fight to destroy ISIL and end the threat the group poses to the United States and the rest of the world. Our coalition will honor this sacrifice by dealing ISIL a lasting defeat," Cook said, using another term for ISIS.

Defense Secretary Ash Carter confirmed the reports while speaking to reporters in Germany, adding that the death shows "it's a serious fight that we have to wage in Iraq."

Charles Jr. rose to prominence in the mid-20th century as a lawyer and businessman who made millions in Phoenix real estate before he was implicated in the $150 billion savings-and-loan crisis that fleeced thousands of depositors with the help of U.S. senators. He always insisted he'd done nothing wrong and served time for fraud, racketeering and conspiracy. The verdicts were later overturned and he pleaded guilty lesser charges. He died in 2014 at age 90.

U.S. Sen. John McCain of Arizona, who was implicated in the scandal as a member of the Keating Five but later cleared of wrongdoing, and daughter Meghan McCain sent their condolences to the family.

"I send my deepest prayers and condolences to the family and loved ones of Charlie Keating who was tragically killed in action fighting ISIL in Iraq. Like so many brave Americans who came before him, Charlie sacrificed his life in honorable service to our nation for a cause greater than self-interest, which we can never truly repay," McCain said in a statement.

Keating was mourned in his home state of Arizona and beyond as a star athlete whose transition to military service came as little surprise to those who knew him. Gov. Doug Ducey ordered flags in the state to be lowered to half-staff on Wednesday in his honor.

A 2004 graduate of Arcadia High School in Phoenix, he was city and region champion in the 1,600-meter run as a sophomore, junior and senior, according to azcentral.com. At Indiana University, he was a member of the 2004-05 track team that finished as a Big Ten runner-up in both the indoor and outdoor seasons, competing in the mile run, the school said in a statement.

His high school track and cross country coach, Robert Wayne Reniewicki, said Keating made the decision to serve his country after the September 11, 2001, terrorist attacks.

"It didn't surprise me when he said (he) wanted to be a Navy SEAL," Reniewicki told CNN.

He said the attacks happened while Keating and his teammates were on a run during his sophomore year and made an impact.

"A lot of guys said they wanted to go in service to serve their country that day," he said.

"When Charlie left IU to enlist and try to become a SEAL, I don't think it really surprised any of us," Robert Chapman, professor of kinesiology at IU Bloomington and men's cross country coach from 1998 to 2007, said in a statement.

"You could tell he was a guy who wanted to be the best and find out what he was made of, and serving as special operations forces for his country embodied that."

"Charlie Keating was a valuable member of the Indiana Athletics community. His father was a decorated All-American and Olympian for the Hoosiers, and their family gave me one of my first coaching jobs in Phoenix," Indiana head swimming and diving coach Ray Looze said. "On behalf of the IU Swimming community, we express our deepest condolences."

ISIS used multiple vehicles, suicide car bombs and bulldozers to break through a checkpoint at the front line and drive 3 to 5 km (1.9 to 3.1 miles) to the Peshmerga base where SEALs are temporarily visiting and were located as advisers, a U.S. defense official told CNN. The gun battle was around the town of Telskof in northern Iraq, the official added.

The U.S. responded with F-15s and drones that dropped more than 20 bombs, according to a U.S. official.

"Everyone extends condolences to the family of the service member that was killed today in northern Iraq," Earnest said at his daily briefing with reporters, adding that it's a reminder of the risks Americans continue to face even in advisory roles there.

Marine Staff Sgt. Louis F. Cardin was killed in March in a rocket attack on a U.S. base in northern Iraq. And an October 2015 rescue mission in northern Iraq claimed the first American casualty, U.S. Army Master Sgt. Joshua Wheeler.

Governor Mike Pence issued the following statement, after news that Navy SEAL Charles Keating IV, a former Indiana University student, was killed in the line of duty while serving in Iraq.

The Governor directs that flags be flown at half-staff effective immediately in Monroe County until sunset on the day of his funeral service.

I ask all Hoosiers to join me today in mourning the loss of US Navy SEAL Charlie Keating IV, who lost his life while defending this great nation,” said Governor Pence. “While he hailed from Arizona, Charlie attended Indiana University where he was a standout track and field athlete. He served this nation with honor and distinction. He made every Hoosier proud and his courageous sacrifice will be remembered always. Our freedoms exist because of heroes like Charlie Keating who willingly step forward and answer the call to serve. The First Lady and I extend our deepest condolences to his family and friends, and I urge all Hoosiers to keep this hero and all our men and women in uniform in their prayers.