NCAA Final Four: Achonwa ready to lead from the bench 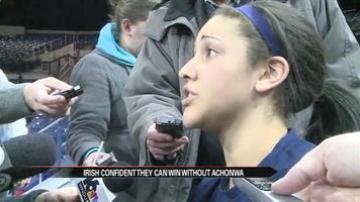 NASHVILLE, Tenn. -- The Notre Dame women's basketball team has arrived in Nashville for the NCAA Final Four tournament. Their fourth appearance in a row begins with the game Sunday against Maryland.

The players seem confident and ready, even though Natalie Achonwa is out for the rest of the season.

On Thursday, Achonwa said the team has set its sights on the Final Four all season. She says as a leader, she expects nothing less than a win on Sunday.

Achonwa tore the ACL in her left knee during the Elite Eight game. She says no injury will stop her from leading her team to victory.

The last time the Irish went up against Maryland, Achonwa scored seven points and had three rebounds. The Irish won the game 87-83 - the closest game of the season.

Although she'll be sitting this one out, she says freshman Taya Reimer will have no problem filling her shoes.

"Do what we all know you can do. I know she would get buckets on me in practice and she can defend and she's athletic and she came to Notre Dame for a reason and I think it's just reminding her that it's nothing new. She doesn't have to do anything new, just be Taya Reimer," said Achonwa.