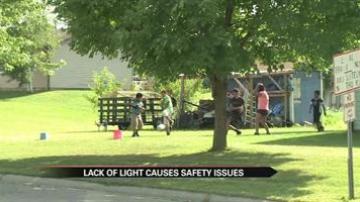 WARSAW, Ind. -- Neighbors in one Warsaw neighborhood aren’t feeling safe after a home and a car were broken into.

Residents of the Eisenhower Park Neighborhood say there is a simple solution to the problem - more street lights.

As Diane Raber pointed up to her front porch light, she said in a few hours it will be the only thing she will be able to see.

There are just three street lights in her neighborhood.

“That’s all the street lights we have in the whole area,” Raber said.

And technically speaking, the lights are not even on her subdivision's property. So when night falls, the majority of her neighborhood is dark.

“Well the concern is that there’s no lights out here. When it gets dark, down there at the corner you can’t see at all,” said resident Michael Randall.

They said it’s making it easier for criminals.

“It is just so very dark here in the evenings and there’s been a lot of break-ins,” Lisa Riley said.

Riley said break-ins aren’t her only concern. She was nearly attacked by dogs during a walk through neighborhood.

“I’ve had a couple instances where dogs have come up barking and growling at me and I didn’t even know they were there until they were right up on me,” Riley said.

With several children playing outside each day neighbors are also concerned about drivers being able to see at night.

“We just want our city to put in some lights so our kids can be safe and our elderly people can walk,” Raber said.

Residents took their concerns to the City of Warsaw and the city said they are working to fix the situation. But adding streets most likely won’t happen this year.

“To have intersections that aren’t well lit is a concern of the city and certainly the city council,” said Warsaw City Planner Jeremy Skinner.

A concern neighbors want something done about soon before someone gets hurt.

“I would just like it to be a safe place for our children to play in and people to get out and enjoy their neighborhood. To take walks, ride bikes, you know. Everyone should feel safe,” Riley said.

The city says right now they are looking into costs and trying to figure out how the street lights will hook up to underground utilities.