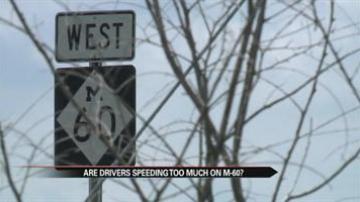 HOWARD TOWNSHIP, Mich. -- A crash at M60 and Yankee Street in Howard Township injured four people and killed one on Saturday.

Helen Evick and her husband have lived at their home on Yankee Street for 60 years and over time, they've seen plenty of accidents. But she was shocked to hear what happened just outside her front yard.

The Cass County Sheriff's office says  Austin Brouwer, 19, was driving north on M 60 at a high rate of speed, passed a vehicle on the right in the shoulder and lost control of his vehicle.

The vehicle then went back onto the paved portion of the roadway and hit a vehicle driven by Douglas Irving, 32, from Niles.

Brouwer's vehicle then went into the grass median and flipped several times.

Brouwer was transported to Memorial Hospital in South Bend by ambulance. He is in serious but stable condition.

The front seat passenger Janet Menting, 21, from South Bend, was air lifted by Air Care to Memorial South Bend where she is listed in critical condition.

Back seat passenger Scott Voresis, 21, from South Bend, was transported to Niles Lakeland Hospital by SMCAS, where he was treated and released for his injuries.

Another back seat passenger Rayna Dobrodt, 23, from Mishawaka, was transported to Niles Lakeland Hospital where she died.

Irving, the other driver, was transported by ambulance to Niles Lakeland where he was treated for his injuries and released.

Alcohol was not a factor in the crash and safety belts were used.

Richard Hostetler says he first heard about the crash on ABC57.

He says he's never seen an accident of that magnitude happen right by his home.

He says, speeding on this road is rare.

"There's usually some state police going by here all the time," says Hostetler.

If you have any information about Saturday night's deadly crash, you're urged to contact the Cass County Sheriff's Department.