Neighbors speak out about heroin bust 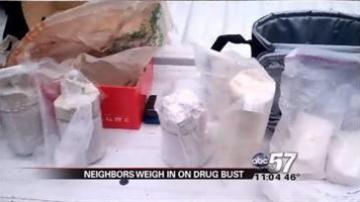 SOUTH BEND, Ind. – Looking at these nice houses on Darden Road, you would never guess this is where police arrested a suspected heroin ring leader. 37-year-old Curtis Lee III was arrested a week ago for picking up a 10-pound heroin delivery from this Speedway.

Police say this man was also involved, 38-year-old Jerome Boyd. Boyd’s neighbors on Woodmont drive say it was only a matter of time before he got caught.

“There were a lot of cars going in and out. A lot of them were unregistered vehicles. And there were multiple families always coming in and out of the house," said neighbor Richard Montalvo.

He says when police did finally make the arrest it was quite a sight.

“Basically me and my mom were sitting in the living room watching TV, and then all of a sudden there were cars filling up the entire street and random regular casually dressed guys pulling out S.W.A.T. vests and automatic weapons," said Montalvo.

He says he is glad cops arrested Boyd, but he says the illegal activity never really scared him.

“No it doesn’t really make me nervous, because things like this are going to happen in neighborhoods everywhere. There is no discrimination with violence or drugs," said Montalvo.