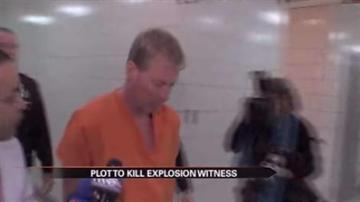 INDIANAPOLIS -- A man arrested in connection with a deadly Indianapolis house explosion is facing new charges.

Prosecutors charged Mark Leonard with conspiracy to commit murder after police say he tried to hire a hit man to kill a witness.

Leonard's offer included $15,000 for the murder. He also offered another $5,000 if the murder looked like a suicide or the witness called 9-1-1 to recant statements about the explosion case.

"Mr. Leonard was given the name of an individual to contact; that individual was an undercover
agent of the federal ATF," said Terry Curry, Marion County Prosecutor. "On March 13th Mr. Leonard placed a call to the undercover agent in which Mr. Leonard again confirmed his intent to have 'MD' killed."

Leonard is one of three people facing charges for the November home explosion that killed two people.

Police say the trio created a gas explosion to get insurance money.